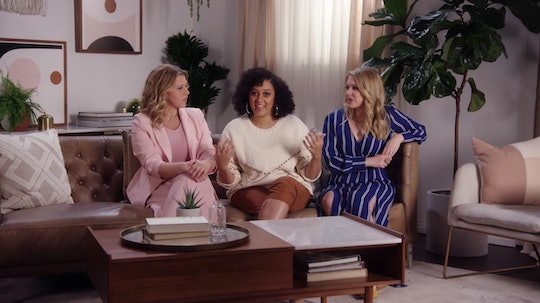 When three popular '90s child actors, now all mothers, came together to play a game of Never Have I Ever with Netflix, they shared more than a few interesting revelations about their experiences in motherhood. But perhaps the game's most interesting discloser came when Tia Mowry revealed she ate her sister's placenta.

Mowry, who rose to fame for her role on the sitcom Sister, Sister in the mid '90s and nows stars in Netflix's Family Reunion, joined Fuller House star Jodie Sweetin and No Good Nick star Melissa Joan Hart for a friendly, and revealing, game of Never Have I Ever. The rules of the game were simple; each mom would take turns reading statements and those for whom the statement was true would place their finger on their nose.

"Never have I ever thought about eating my placenta," Mowry said, reading one of the game's scripted statements. As Sweetin and Hart scrunch up their faces in apparent disgust, Mowry brings the tip of her finger to her nose before collapsing in laughter.

"You know what makes this even weirder?" she said. "It wasn't mine. It was my sister's placenta."

"It was in the pills," Mowry said after confirming that yes, she did in fact eat some of her sister's placenta.

But while Mowry took a taste of her sister's placenta, she apparently passed on eating her own. "But I did request to see my placenta after my baby was born," she said, before telling Sweetin she wasn't sure why she ate her sister's but not her own.

Of course, Mowry's placenta disclosure wasn't the only interesting tidbit revealed by the three moms during Netflix' Never Have I Ever game. Hart, who spent the '90s as the star of Clarissa Explains It All and then later Sabrina the Teenage Witch, divulged that her children have managed to eat a few super gross things over the years.

"The more germs that you expose to your children, I think the healthier they get," Mowry said when the conversation turned to giving babies pacifiers that have fallen on the ground and not been washed. But Mowry likely wasn't prepared for the types of germs Hart's kids have reportedly been exposed to.

"I was at a restaurant and my kid was underneath the table and he was very quite for a long time," Hart said, "[He was] eating the gum off the other side of the table. I was like, 'no!'"

"Oh, and he ate dog poop once," Hart calmly added, much to Mowry and Sweetin's horror. Hart went on to say she called her child's doctor for advice on what to do and was told that, if the dog didn't have worms, rinsing the child's mouth out would be fine.

As shocking as the women's stories may be, at least we know that the wild world of parenting is sometimes just as gross and weird for celebrities as it is for the rest of us.