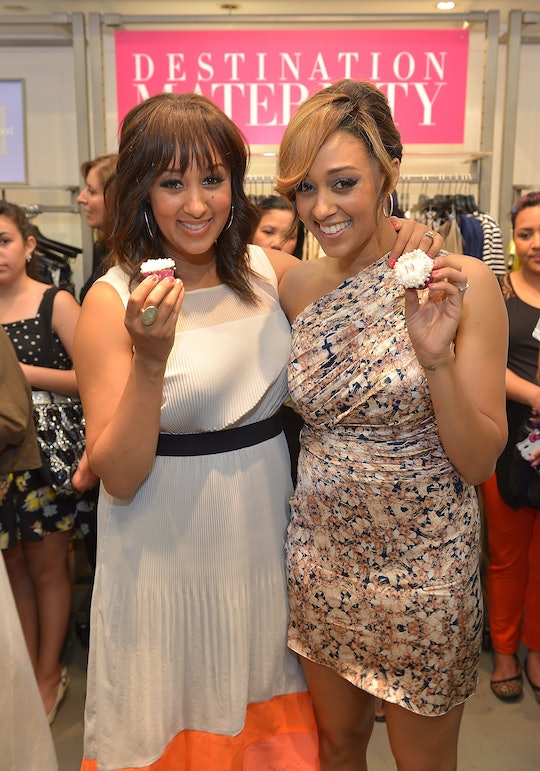 Although we aren't always what we eat, what we eat can affect our health. In a recent interview with Parade, former Sister, Sister actress and Cooking Channel host Tia Mowry said that junk food affected her fertility for the worse. Mowry, who has a new cookbook called Whole New You, coming out this week said that, as a teenager on set, she would eat tons of junk food, since that was available from the catering service.

To counteract all the sugar and calories, and to keep up with increasing pressure to look a certain way, Mowry said that she used to take diet pills. She stopped in college but shortly after, Mowry started having extreme abdominal pain that was eventually diagnosed as endometriosis.

Mowry explained that she had two laparoscopic surgeries to ease the pain until her OB-GYN finally recommended something else: changing her diet and not eating dairy. Mowry wrote in her first cookbook, "It had never even occurred to me that something I had always eaten (so innocently) could be causing me such harm." She added that hearing her favorite foods could be exacerbating her endometriosis and affecting her chances of getting was like a slap in the face. She quickly met with a nutritionist, changed her habits, and now she's a poster child for "clean eating," or staying away from processed foods.

It's a little more complicated than Mowry suggests, but if you're concerned about your fertility or possible endometriosis symptoms, you should definitely talk to your OB-GYN about your diet and see if there are changes that you can make. There is no simple link between fertility problems, endometriosis, and junk food — it's a little more nuanced than that — although the food we put into our bodies does matter. If your endometriosis is severe, a diet change might not do the trick right away, but it's a great place to start.

Endometriosis is when uterine tissue grows outside of the uterus, like in fallopian tubes, ovaries, or the outer surface of the uterus. It can only be diagnosed with a mini-surgery, so if you have extreme, worsening pelvic pain, ask your doctor about it. No one knows what causes endometriosis (and it certainly isn't all due to potato chips and Twizzlers), but it's possibly genetic or related to a hormone imbalance.

Here's Why Your Diet Can Matter

Estrogen sustains and worsens endometriosis, so many treatments (besides laparoscopic surgery or, in the worst cases, a hysterectomy) revolve around lowering estrogen levels in your body. If you aren't trying to get pregnant, your doctor may prescribe a hormonal birth control or IUD to lessen the pain. If you are, your doctor might prescribe a Gonadotropin-releasing hormone (Gn-RH), which lowers estrogen, but causes a mini-menopause. Endometriosis symptoms will return when you stop taking it, but you'll also have a better shot at getting pregnant.

Instead of medicine, or as a complement to it, doctors will usually recommend a diet change. Dairy products do exacerbate endometriosis because it promotes estrogen in the body, which is why Mowry started to feel better when she stopped consuming it. Anti-inflammatory foods, like fatty fish, leafy greens such as kale or spinach, tomatoes, olive oil, berries, and ginger, can also help reduce pain. An "all-natural" or "clean" diet will help with this, since those are the kinds of foods clean diets are comprised of.

There's no one-stop diet fix or one known cause behind fertility issues. But it's good that Mowry is being open about her journey, since it likely makes many women feel less alone in their own struggles.