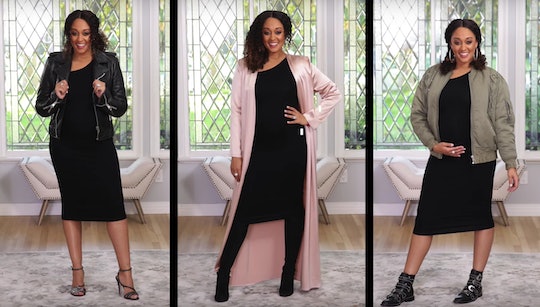 The star of Sister, Sister, Tia Mowry, is expecting her second child with her husband, Cory Hardrict. And she's not shy about sharing photos of her "baby bump" on Instagram, much to the delight of her fans. Tia Mowry shares photos of her bump all the time, especially compared to some celebrity moms who don't post many "bump" photos to social media at all during pregnancy (*cough* Kardashian sisters *cough*).

Tia announced in November that she's expecting again, according to People. She posted a super cute Instagram photo of her husband and their 6-year-old son Cree kissing her bump, which is possibly the most adorable pregnancy announcement I've seen in a long time.

And that wasn't the only photo she's shared of her pregnancy. There are a ton of photos featuring her bump on the account, and she's clearly not afraid to show it off. Tia has also posted at least one video to YouTube about how to dress in cute outfits with a baby bump, so she's obviously embracing it.

Right now, Tia is a busy mom to son Cree, who also makes appearances in her Instagram photos and YouTube videos. But that will all change when she and her husband welcome their next kid, and there's sure to be a ton of adorable sibling photos for fans to enjoy too.

The actress was formerly on the show Sister, Sister with her twin, Tamera Mowry-Housley, in the '90s. When Tia first announced her pregnancy, Tamera retweeted the announcement, writing, "Yayyyyy! Couldn’t wait to tell the world. I’m going to be an auntie!!!!!"

Tamera has two children herself — her daughter Ariah and her son, Aden, according to People.

So far, Tia doesn't seem to be having any trouble at all getting used to the idea of having another baby, if her adorable Instagram photos and videos are any indication.

In fact, after her sister Tamera announced that she was expecting baby number two, Tia told TooFab that she was open to the idea of having another kid herself, but was waiting for the timing to be right. She told TooFab:

It's so funny because that happens to be the question that a lot of people are asking. It's very busy in our household right now, so it's all about trying to find that right time to bring another child into this world. But it's definitely something that's on my radar.

Tia also suffers from endometriosis, a condition in which the tissue that normally lines the inside of your uterus grows outside of your uterus instead, and it can lead to fertility problems, according to the Mayo Clinic. But she told Parade that after she changed her diet, she got pregnant with her first child "right away." She hasn't publicly shared details like that with this pregnancy, but she has shared plenty of photos that seem to indicate that things are going smoothly.

Fans seem to love that Tia is so willing to share photos of her "bump" throughout this second pregnancy. Comments on the photos on Instagram say everything from "You’re glowing!! Congratulations on expecting!," to "U make pregnancy beautiful," to "Tia you are one very happy pregnant mama," and more.

But it's Tia's own comments on the photos she posts that may be the sweetest of all. On one shot from mid-November, the only thing she put as a caption for a photo of her holding her "bump" was, "My heart is so full."

Here's hoping there are plenty more fun, fashionable, and downright adorable bump photos for Tia to share with her fans. Though, not too many more — fans (not to mention Tia herself) are sure to be anxious to actually meet the new baby very soon.