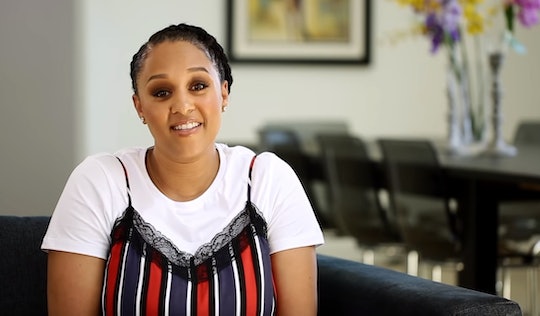 Tia Mowry Is Sharing The Details Behind Her Journey With Endometriosis

Tia Mowry, of Sister, Sister fame, has been upfront and honest about her life over the past few years, specifically on her web series,Tia Mowry’s Quick Fix. She shares recipes, life lessons, and updates on her family. And now she’s ready to open up about another big issue: her health. Tia Mowry talks endometriosis and her journey learning to deal with the disease, as well as how it affected her as mother, in this exclusive clip.

“For years, I would have very painful menstrual cramps,” Mowry explained. “I remember there was this one time, in particular, when I was in college. I was in so much pain that I had to excuse myself from the classroom. I ended up going to the bathroom and staying there until the class was over.” Mowry said that her sister, Tamera, had to drive them home so she could lie down in the backseat.

She spoke with her doctor, who would give her the usual methods: Exercise, heat, etc. Then, a woman named Alicia directed her to a specialist who encouraged her to have the exploratory surgery that led to her diagnosis. “What they find in surgery is scar tissue along the lining of the uterus,” Mowry said, and adding that the doctors can remove at least some of it in order to ease pain. “But the thing about endometriosis is, it comes back.” Just two years later, she had surgery again.

For Mowry, who was only 25 at the time of her diagnosis, the idea of not being able to have children was scary. “I’m with the love of my life, Corey, who’s my husband now. We were talking about getting married and having kids, and when I first learned that there was a possibility I could not have children — mind blown.”

Understandably, this was a confusing process. In addition to the surgery, Mowry had to change her diet. “There are certain foods that cause inflammation in the body,” Mowry says. This includes many of the things that are generally considered bad for you like dairy, anything that’s highly processed, and sugar. Though she was turned off by the idea at first, Mowry went on a mission to help heal her body.

“I just started to create recipes and cook at home — and lo, and behold that’s how Whole New You was created,” Mowry says, referring to her 2017 cookbook. She did this for one year, and she says, “I truly believe, and so does my doctor, because I followed those guidelines, I was able to have my son, Cree.”

Today, Mowry isn’t quite as strict as she used to be. She indulges from time to time, and then she’ll do “little detoxes” to help get her back into the right mindset. Mowry’s daughter, Cairo, was born in 2018, so during that time, she kept things clean, but allowed herself to enjoy some hard-earned snacks postpartum.

Endometriosis is a disease that many are just learning about. A healthy diet that removes inflammatory foods can be helpful, but Mowry explains that one of the things that helps heal your uterus even more is actually having a baby — a frustrating concept, since it can be so hard for women with the condition to get pregnant in the first place.

In the end, Mowry just wants to help continue the conversation, allowing others to learn from what she went through in case they’re experiencing similar symptoms. “Listen to your body,” she instructs. I think that’s a good lesson for all of us. You can watch the series on Kin Network, which is accessible across multiple social platforms including Facebook, Instagram, YouTube and Amazon.