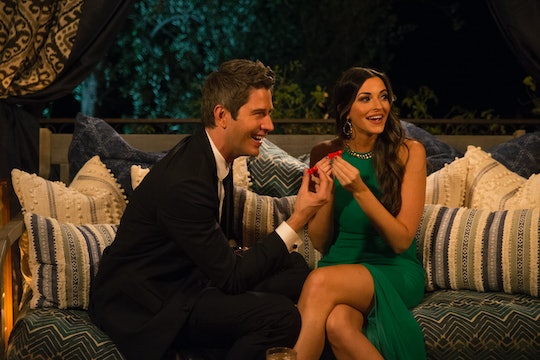 Tia From 'The Bachelor' Is Just as Likable IRL

The beauty of shows like The Bachelor and The Bachelorette is that once filming has completed, all of the contestants get to watch the show each week just like the rest of us. And in some cases, they also take to social media to give commentary on the show, much like Tia Booth. And when it comes to the show, Tia’s Twitter shows how likable The Bachelor contestant is in real life and how she seems to have a sense of humor about about the season. That's extremely refreshing since the stress of the competition and the whirlwind of filming is likely a lot to handle for these women, as it would be for anyone.

Although Tia joined the wonderful world of Twitter back in November, she’s been very active with her tweets and almost all of them have been about The Bachelor. It’s not really surprising, though, that her sense of humor has come out through her social media account, since she’s proven herself to be fun to watch so far this season. From her very first meeting with Arie Luyendyk Jr. and the "little wiener" joke to her totally giving it her all during the demolition derby group date in Episode 2 this season, Tia has been a standout (in a good way). And it seems like that’s exactly how she is off the show as well.

She has a ways to go before she’s in the thick of Twitter and posting several times a day about pretty much everything, but so far, she’s retweeted only the best and most entertaining posts about Arie’s season of The Bachelor and it’s made her even more likable. As most fans already know, Tia is best friends with Raven Gates from Nick Viall’s season of The Bachelorette and it was at Raven’s insistence that Tia took the chance to find love on the show. But Raven became a fan favorite during Season 21 and I can't help but see some of the same qualities in Tia.

Obviously the physical therapist from Weiner, Arkansas isn’t a carbon copy of Raven, but she definitely has some of the same fun-loving, outgoing qualities as her friend. Additionally, she appears to be someone who really is there to find love. But because of her friendly personality and down to earth approach to the show, Tia’s already gotten so many new fans who are rooting for her, including some from Bachelor Nation, like Evan Bass from JoJo Fletcher’s season of The Bachelorette, who tweeted about her during last week's episode.

Tia also knows how to make fun of herself and point out the things she’s said and done on The Bachelor so far this season (like swearing after losing at that demolition derby group date), and her Twitter reflects that. But even if she hasn’t been as vocal as she probably could be on the social media platform, you can definitely see her personality shining through.

Arie revealed in an interview with People that he fell in love with two women this season and although it’s still very early in the season, it's possible that one of them was, in fact, Tia. "I fell in love with two women, and I didn’t know I was capable of that," he revealed. "I’ve never been in that situation, and it was really hard. And they were two very different women, and that’s what made it even harder."

Tia’s Twitter proves that The Bachelor contestant is every bit as silly and likable as she appears to be in the show. I wouldn't be surprised if Arie started seeing that himself soon. And if Raven could make to the final two during her season, then I'm inclined to believe that maybe her BFF can too.