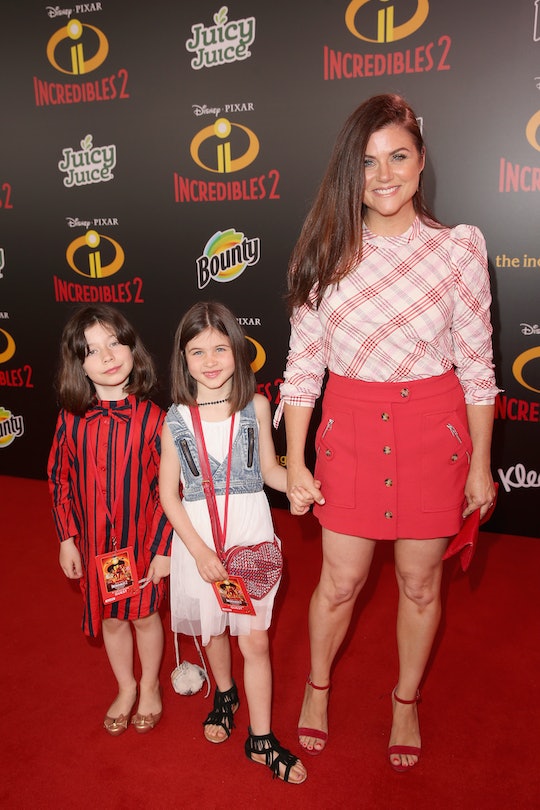 “Put your phone down, you’re missing it!” That’s what Tiffani Thiessen yelled through the window to her husband Brady Smith as he pushed their preschool-aged son, Holt, on their swing. (The couple are also parents to Harper, 9.) As an actor, Smith admitted he’s more tethered to his phone than he’d like as he waits for news about parts and auditions.

The scene is all too relatable for parents and caregivers of young children; after all, our phones and devices offer a tempting siren song of escape, an oasis of grown-up conversations and tastefully arranged Instagram tableaus in a desert of sticky hands and grating songs about infant sharks. Unfortunately, this often devolves into habitual, digitally-fueled detachment.

His wife’s words sparked a light bulb moment; the pair had long dreamed of collaborating on a children’s book, but no idea had felt just right — until that second. Smith explains, “I thought, “that’s it!” That day, I basically sketched out the entire book, then showed it to my beautiful wife, and we both agreed this was the book we should work on.”

The charming result is You’re Missing It! (Nancy Paulsen Books, Penguin Random House) a children’s picture book co-written by the couple and illustrated by Smith, which chronicles a little boy’s imaginative romp through his local park. The son repeatedly implores — and eventually succeeds in convincing — his father to pay participate with him in the adventure unfolding just beyond his screen. In other words, this is the kind of book that might make parents feel that little queasy glop of conviction about how often screen time and kid time overlap, but the authors’ genuinely sunny dispositions and realistic approach keep the moral from feeling heavy-handed.

When I was growing up on that set, cell phones and screens just weren’t everywhere like they are today.

“Kids see everything with this extra gloss on everything, I wanted to represent that,” he says. The son of a school librarian and a landscape architect and the brother of a graphic designer, Smith’s creative roots deep. After earning his BFA and becoming bored with an early career as a professional painter in Houston, Texas, Smith decided to pursue his newfound passion for acting.

“I moved to LA, I didn’t know anyone there at all. So I decided to try the very very easy career of acting!" he says. "That’s a joke if you couldn’t tell.”

During his very first TV gig, he met Thiessen, and he says with a warm smile, “the rest is history.”

I was always raised in a house where we’d gather around the dinner table, everyone was present, and we’d have good conversation about our days. Brady’s family was the same way.

Despite growing up onscreen as the iconic cheerleading girl-next-door Kelly Kapowski on Saved by the Bell, Thiessen said her family always placed a high premium on being together and present. “I was always raised in a house where we’d gather around the dinner table, everyone was present, and we’d have good conversation about our days. Brady’s family was the same way. So now we really try to continue that. It’s a balance, there are times that are good times to maybe watch a show and times that aren’t.”

She also acknowledged that today’s parents face exponentially more obstacles in managing the family’s screen time than when she was growing up (even while starring in a popular TV show). “When I was growing up on that set, cell phones and screens just weren’t everywhere like they are today. If you did have a cell phone, they were those big huge ones.”

Today, she’s grateful that her children seem mostly content with exploring the offline world, at least for the moment. “We’re very lucky, because Harper is a girl who just loves to be outside. She would really rather just be outside with her friends. Holt is happy playing with his figurines and toys right now. But ask us again in 10 years!” she adds with a laugh.

Even while cultivating a culture of presence in their busy household, the couple confessed that good parent communication and planning remains a delicate balancing act. “It’s a balance, week by week, day by day, hour by hour. We don’t have a nanny, so we really have to constantly be talking and be honest. ‘Ok you got this? I got this one.’ The couple also regularly relies on family members for childcare when shooting. “It truly takes a village,” said Thiessen. “I have a paper in front of me right now, and on set, with all the kids camps and appointments, trying to keep everything straight.”

Seeing any child star end up so aggressively centered is refreshing, if even a bit jarring. I asked Thiessen and Smith where some of their characters would be today. Smith imagined that his zen Parks and Recreation character Grant Larson “would have left the government by now, he would be relaxing in a hammock somewhere.”

As for Kelly Kapowski? Sadly, our hopes for a Hot Sundae reunion may never come to pass. “ Oh wow, I’ve honestly never really thought about that! Let’s see, at the end of [Saved by the Bell] she and Zack got married, so probably they would have had a couple of kids by now.”

In the alternate universe where our favorite TV characters live on forever, maybe she’ll urge Zack to put down his giant phone and read them this adorable book.