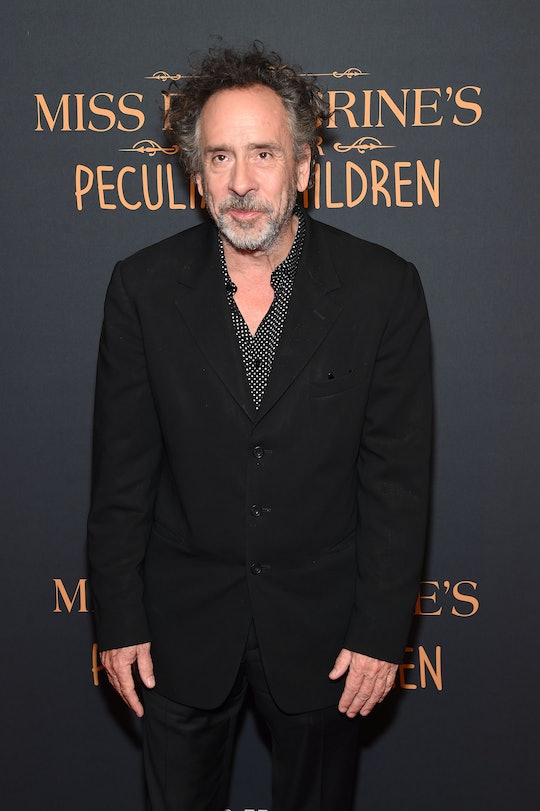 If you don't blink during the two-and-a-half minute trailer for Tim Burton's newest film, you'll catch the spilt second when Samuel L. Jackson's face fills the screen. It's a notable moment not just because Jackson is an iconic, critically acclaimed actor starring in the silver screen adaptation of the novel Miss Peregrine's Home for Peculiar Children, but because he is the only character of color to appear in the movie. The story is set in a fantasy land, but the real-life casting leaves much to be imagined by way of inclusivity. And while the film itself has already received rave reviews (The Los Angeles Times in an early review wrote that "the sense of film craft here is so delicate and assured that, even at its most razzle dazzle-prone moments, the movie never seems to be straining for effect"), the decision to very obviously whitewash the cast seems to be of no concern to the movie's director. In fact, Tim Burton's comments on diversity are emblematic of a growing and controversial discussion in Hollywood.

Miss Peregrine's Home for Peculiar Children, first introduced by author Ransom Riggs in 2011, focuses on a make-believe Welsh orphanage that houses "peculiars," or children with supernatural abilities, like controlling bees and pyrokinesis. It's a dazzling, ghoulish representation of human diversity (one girl even has a mouth on the back of her head), but still — Burton reportedly didn't feel it "called for" anyone who isn't white, as he told Rachel Simon of Romper's sister site, Bustle.

But what about Jackson?, you ask. He plays the villain who's out to murder the children, of course! Skip to 1:59 in the trailer — no more, and no less — to catch him:

Burton defended the casting with the following analogy:

Nowadays, people are talking about [diversity] more ... [But] things either call for things, or they don’t. I remember back when I was a child watching The Brady Bunch and they started to get all politically correct, like, OK, let’s have an Asian child and a black — I used to get more offended by that than just — I grew up watching blaxploitation movies, right? And I said, that’s great. I didn’t go like, OK, there should be more white people in these movies.

What Burton refers to as "politically correct" — i.e. casting people of color in movies and TV shows to reflect the actual cultural and ethnic makeup of the United States — is what Hollywood should be calling a major moneymaker. The 2015 Hollywood Diversity Report found that more diversity in films = more success in the box office. "You’d think that was obvious," the report's co-author, Dr. Darnell Hunt, told The Guardian. "It’s beginning to sink in that diversity is good business strategy.”

Still, minorities are woefully underrepresented in film. They make up 40 percent of the population, according to the report, but are outnumbered 2 to 1 as film leads and directors and 3 to 1 among film writers. A 2016 study from the University of Southern California found that 28.3 percent of characters with dialogue in films and TV shows released between September 2014 and August 2015 were from non-white racial/ethnic groups

And whiteness begets whiteness. A Variety analysis revealed that a full 90 percent of showrunners for scripted television shows slated for the 2016-2017 season were white; Unsurprisingly, this simply leads to more shows led by white people, mostly men.

A lack of diversity in leadership also can mean that there are fewer roles for actors of color. Burton, who's directed 36 films in his storied career so far, had never before cast a black actor in a leading role until Jackson, Simon reported. That's a stat that Jackson told her he noticed when he accepted the part.

"I had to go back in my head and go, how many black characters have been in Tim Burton movies?" he said. "And I may have been the first, I don’t know, or the most prominent in that particular way, but it happens the way it happens. I don’t think it’s any fault of his or his method of storytelling, it’s just how it’s played out. Tim’s a really great guy."

I have no doubt that Burton really is a "great guy." Between Charlie and the Chocolate Factory and James and the Giant Peach, he's certainly directed many, many great movies that are guaranteed to stand the test of time. But he would do his audiences, Hollywood, and even his own wallet a favor by casting more people of color, because reality isn't all white like a Tim Burton movie. Even in a home for peculiar children, it would be boring if it were.