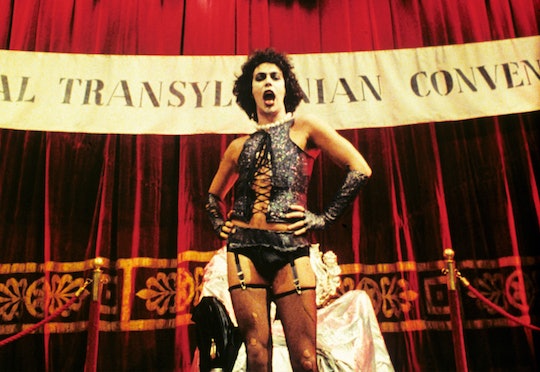 Tim Curry Will Star In Fox's 'Rocky Horror Picture Show' Remake, But He Won't Play The Part You Think

It has now officially been more than 40 years since Dr. Frank N. Furter stole our hearts and confused our sexualities in The Rocky Horror Picture Show, so fans should be extra thrilled to know that they can see Tim Curry in The Rocky Horror Picture Show remake special airing on Fox in the fall, Rolling Stone reported, returning to get us all itchy and excited again. This time, Curry will be in the more prim and proper role of the narrator and criminologist, who appears at plenty of points in the original film to help us along the way. Can't you totally imagine Curry, in all of his dapper English glory, slipping right into this new Rocky Horror role?

In the special, which will air on Fox later this year, Orange Is the New Black's Laverne Cox will take over as the overly sexual and weirdly and insanely appealing Furter, while Adam Lambert is set to take over Meat Loaf's former role of delivery bad boy, and Victoria Justice is going to be filling in for Susan Sarandon's Janet. It's hard to say if this new crew can pull off the sort of genius ensemble that helped shape The Rocky Horror Picture Show into the cult classic that it is today; after all, the film is still being played in theaters across the country and still inspiring old and new fans alike to dress up in their best corsets and frizzy wigs. But there's no doubt that they'll try.

If you remember, NBC brought The Sound of Music to TV last year with a live special starring Carrie Underwood, attracting more than 18 million live viewers and surprisingly high ratings. This Rocky Horror Picture Show Fox special won't be live, mind you, but it will be a total remake of the original and last two hours to boot. So you hopefully won't be jipped on any of Janet's white slip and bra scenes or the "Brad - Janet - Rocky - Dr. Scott" scene that is the last one that should never be cut short. But you aren't alone in any skepticism you harbor, either, as this Rocky Horror remake could either be a whole new cult classic, or just make us all go out and catch one of those midnight showings of the original and let out a collective sigh of relief.

Not surprisingly, fans of the original have taken to Twitter to let the world know their hopes that Tim Curry will bring it to Fox's Rocky Horror remake:

As you can see, there's a fair amount of skepticism about the remake itself. But for Curry's involvement, they've got almost unanimous enthusiasm. Who's ready to to the Time Warp again?