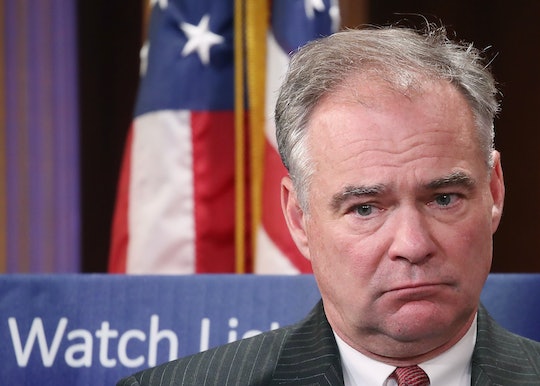 Today Former Secretary of State Hillary Clinton announced her running mate will be Tim Kaine, a well liked Senator from the swing state of Virginia in the race for the White House. True to form, the snark machine got quickly fired up and started giving forth some of the greatest Tim Kaine eyebrow memes imaginable, which is the internet's way of welcoming him to the race. So welcome Senator Kaine, today it all officially starts.

Sen. Kaine wasn't the wildest or most liberal choice, but he's a guy who has known Clinton for years, can help her campaign in Virginia, a swing state, and speaks fluent Spanish, according to the New York Times, which could potentially help with Latino voters disaffected by Trump and the GOP's anti-immigration policy positions.

But if anyone is worried Kaine is too safe of a choice, Clinton thinks he's just the right guy got the job. The New York Times reported that after being asked if Kaine was "boring" she responded, "I love that about him. He's never lost an election," Clinton said.

And his signature eyebrow has become a bit of a brand for the Senator.

But epic eyebrows aside, Clinton might have the toughest time selling Tim Kaine to the more liberal wing of the Democratic party. He's come out over his career as a Pro-Life Democrat, saying that because of his deeply held Catholic faith, he is personally against abortions, but supports the rights of women to choose, according to the Washington Post. He has also pushed back against some banking regulations and supports President Obama's Trans-Pacific Partnership trade deal, which has been rejected by Vermont Senator and Clinton primary rival as a job killer in the U.S.

Besides those sticky policy positions, Kaine is widely regarded as a "nice guy," according to Newsweek. "...Friends and former colleagues of Kaine's describe him as deeply unpretentious, with little regard for the trappings that come with high public office," Newsweek reported.

And his "everyman" appeal could help the Clinton campaign peel off a dew white male votes from Republican voters turned off by the decisive, harsh toned rhetoric coming out of the Trump campaign.

Kaine might also be helpful cleaning up Clinton's image as being a little, well, "crooked" as Trump is fond of saying.

"The boy is cleaner than the board of health,” Democratic political consultant Dave “Mudcat” Saunders said to the Washington Post. “If it’s one thing Hillary needs, it’s clean.”