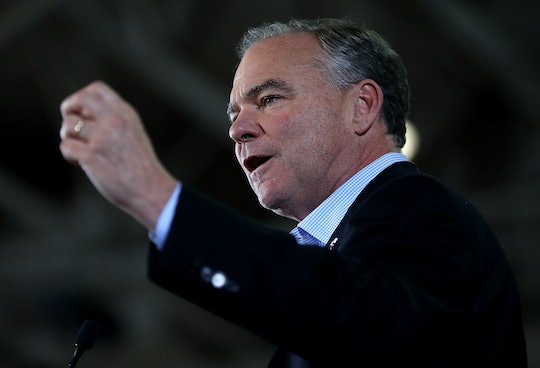 Not holding back, Kaine told CNN his full thoughts in an interview on Thursday as the 114th Congress came to a close, explaining,

Gen. Flynn’s trafficking in conspiracy stories that a fourth-grader would find incredible suggests either that he’s highly gullible or that he’s so consumed with malice that he loses his ability to judge what’s fact and what’s fiction.

Kaine elaborated on how this might affect Flynn's judgement in his future job in the Trump administration, saying, "Having a national security adviser who has demonstrated either such gullibility or such malice in charge of offering advice to the President on the critical national security issues of the day, I think, is highly highly troubling." Ultimately, Kaine insisted, "I think he's demonstrated that he doesn't have the judgment for the job."

The "conspiracy stories" to which Kaine is referring likely includes Flynn's recent Tweets about a conspiratorial article. The article in question "appears to refer not to alleged Clinton-related sex crimes at Comet Ping Pong but rather makes explicit reference to [billionaire donor and convicted pedophile Jeffery] Epstein," estimates The Washington Post. But the general is not the only Flynn who's been pushing anti-Clinton media lately. Flynn's own son, previously his chief of staff, circulated "Pizzagate" propaganda online himself, which led to his being fired from his then-position on Trump's transition team.

Kaine isn't alone in his concern about Flynn's penchant for spreading conspiracies. House Rep. Adam Smith voiced his qualms as well. "[Flynn] has regularly engaged in the reckless public promotion of conspiracy theories that have no basis in fact, with disregard for the risks that giving credence to those theories could pose to the public," Smith told The New York Times. Smith, like Kaine, said he believed that "someone who is so oblivious to the facts, or intentionally ignorant of them, should not be entrusted with policy decisions that affect the safety of the American people."

Kaine was also sure to voice his opinions this week on Trump's proposed head of the Environmental Protection Agency, Oklahoma Attorney General Scott Pruitt, noting:

He's a climate science denier. And that causes me great concern because if there's any agency of the federal government that virtually every decision they make is a decision that's based on science.

Condemning Flynn's spreading of fake news is a strong step for Kaine, who's remained active and vocal about his thoughts through out Trump's transition. He may not have won a coveted VP seat in the White House, but Kaine is proving that he's here to stay — and to speak his mind.