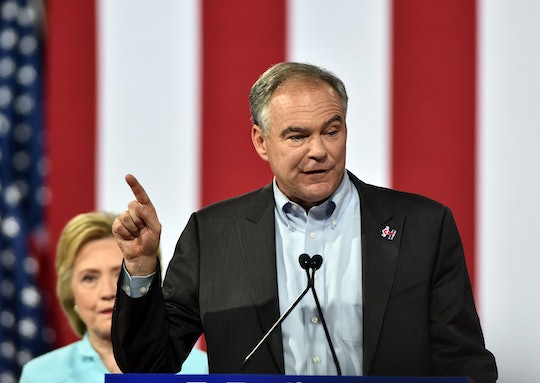 When Democratic presumptive nominee Hillary Clinton picked a vice president, she chose one with a longstanding record of championing education issues. Virginia Sen. Tim Kaine not only stands with Clinton when it comes to issues like free community college tuition, early childhood education, and increased access to technology, but he's also with her when it comes to more controversial education initiatives. At a time when many people (on both sides of political lines!) are advocating against country-wide education standards, Kaine supports Common Core, a set of standards that aim to standardize American children's education, regardless of what state they're in.

When Kaine tried to sign Virginia up for Common Core (spoiler alert: his attempts did not go well, and Virginia remains one of the few states without Common Core), he said:

Today, we live in a world without borders. It not only matters how Virginia students compare to those in surrounding states – it matters how we compete with countries across the world.

Some parents and educators see the Common Core as a way to teach their students new ways to solve problems (prompting deeper understanding, rather than simply plugging and playing) and force schools to stay up-to-date. Others have criticized the Common Core for what they see as an increase in standardized testing and a decrease in student engagement.

Kaine's not all about Common Core, either — it just happens to be one of his more controversial positions in the world of education. He also happens to support fairer teacher compensation, improved access to technical and career education, and increased funding for education (from kindergarten to college). While he was governor, the number of kids enrolled in pre-school in Virginia went up by 40 percent, and he's backed several education bills during his time in the Senate to increase education access and protect LGBTQ students.

No matter what your opinion is on Common Core, a politician's views on education are important to take into account when voting (at least, they are if you believe education is the key to a country's success). Compared to other countries, American students' education leaves them trailing many other developed nations, so policies surrounding education should rank as a top priority when voters take to the booths. (Whether education deserves a higher ranking than a wall along the Mexican border, of course, is up to you.)