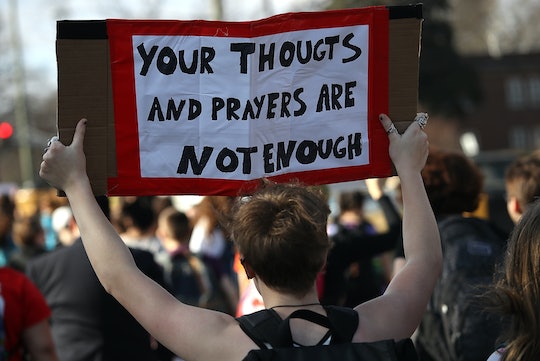 TIME magazine is often recognized for its compelling and powerful covers. And on Thursday, TIME's cover featured the parents of school shooting victims. The moving portrait is a reminder of the ongoing gun violence in America, and it gives a voice to the "invisible network" of parents who've lost their children to this horrifying epidemic.

The news cycle in America can move quickly, especially when it comes to mass shootings. This phenomenon can likely be explained by the frequency of these tragedies — ABC News reported Thursday that the United States averaged at least one mass shooting every month in 2018. And in 2017, there were 346 mass shootings, according to the Gun Violence Archive.

When the public refocuses its attention and efforts on the next mass shooting, victims' family members tend to be left behind. That's why it's important for those parents who've been affected to create a network of advocacy and support amongst each other, something that TIME highlighted with its heart-wrenching cover featuring seven parents who've lost children to gun violence.

"Parents who lost children in school shootings find comfort in a group no one wants to join," TIME's Twitter account wrote about its new cover.

Additionally, the cover reads: "The world moves on and you don't."

Wright-Young's son, Tyrone Lawson, "was shot to death outside a high school basketball game in Chicago in 2013," as TIME reported.

Willey lost her 16-year-old daughter, Jaelynn, who was killed by a fellow student at Maryland's Great Mills High School in March, according to Newsweek.

Pollack's 18-year-old daughter, Meadow, was killed in the Stoneman Douglas High School shooting in February, according to The Miami Herald.

Darshell's 17-year-old son, Bernard Scott, was shot to death in April 2013 while hanging out a local playground in Philadelphia, according to NBC Philadelphia.

Mauser lost his 15-year-old son, Daniel, in the April 1999 Columbine High School mass shooting, according to The Guardian.

Hockley's 6-year-old son, Dylan, was killed in the December 2012 mass shooting at Sandy Hook Elementary School, according to NPR.

The cover's accompanying article also included other parents who've lost their children to gun violence, while examining the aftermath of their personal tragedies.

Although each journey of grief is different, the interviewed parents agreed that the support network they've created is important. “We understand the pain, the trauma and the long-term aftermath. It’s a brother and sisterhood,” Joe Samaha, whose 18-year-old daughter Reema, was killed in the 2007 Virginia Tech mass shooting, as TIME reported.

As for the public's response to TIME's cover story? Many people cited the cover as proof that gun reform in America needs to happen now.

"This breaks my heart every time I see it," one person wrote on Twitter. "Parents should be worried about what their high schoolers are wearing to prom or what their little ones are wearing for picture day...not worrying if their kids will return home safe. We need gun reform now!"

"There’s no cover large enough to photograph the devastation and the heartbreak," someone else said. "Nothing can be said to bring these families comfort. Creating STRONG laws for firearms would be a start. This took a lot of courage for these parents to be photographed. #NeverForgotten."

Although it's comforting to know that these parents featured in TIME's story have found a support network among one another, they shouldn't be in that position of this "invisible network" in the first place.

More Like This
Firefly Lane Is Coming Back To Netflix For One More Final Season
Exclusive: Your Favorite Yeti Is Back With More Adventures In New 'Abominable' Series
10 Horror Movies With Creepy Kids That Will Scare The $#*% Out Of You
The Complicated Targaryen Family Tree From House of the Dragon Explained