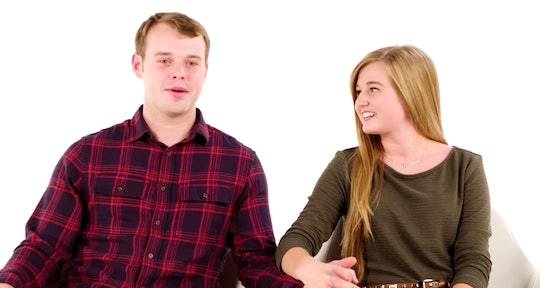 Soon-To-Be Parents Joseph & Kendra Duggar: A Timeline Of Their Relationship

Being a part of the Duggar family comes with a certain set of expectations. Long hair and skirts for females is a given, as well as homeschooling children and strictly limiting kids' access to television and the internet. As for relationships, side hugs are about as intimate as it gets — that is, if you make it past Jim Bob's screenings and obtain his blessing to begin a courtship. For the lucky few who have entered into a courtship with one of the Duggar brood, though, things really speed up from there. In fact, engagement (and therefore hand holding) are probably just around the corner. Much to no one's surprise, the timeline of Joseph and Kendra Duggar's relationship has played out in typical Duggar fashion.

Joseph and Kendra knew each other for about five years before becoming anything more than friends, according to People. On March 9 of this year, the pair officially confirmed they had entered into a courtship, according to Us Weekly. "The first time I met the Caldwell family was whenever I visited their church when the Forsythes were going there after one of their family camps," Joseph said in a TLC video. "So we've been talking for about six months and really just right when we first started talking, we really hit it off really well."

A little over two months later — on May 26 — Joseph proposed to Kendra at his sister, Joy-Anna's wedding, according to People. (He had obtained permission from Joy-Anna and her new husband, Austin, prior to the big move, and they had reportedly whole-heartedly supported them.) “I was definitely nervous going into it, but I wasn’t afraid that she was going to say no, because she has said, ‘I’m just waiting on you!’” Joseph told People after the proposal. As for Kendra? She was completely caught off guard. She told People:

I’m so happy and so shocked. There’s so many words I want to say, but just shocked. I had absolutely no idea. He had the ring in his pocket so when I went to go help myself and grab mints out of his pocket, he grabbed at his pocket and I pulled my hand away. But then I quickly forgot about it.

Joseph, 22, and Kendra, 19, exchanged vows on Sept. 8 at the First Baptist Church in Siloam Springs, Arkansas, according to Us Weekly. At the grand affair, Kendra's father, who is a pastor, officiated the ceremony. The newlyweds ended up traveling to Greece for their honeymoon. “We’re so excited to be newlyweds now,” Joseph said in a TLC video posted October. “We just want to thank all the fans for all your support and your encouragement to us. Y’all mean a lot to us.”

It wasn't long after the pair officially tied the knot that fans began speculating about a pregnancy. A Caldwell family photo — with Kendra "strategically" hidden behind family members caused rumors to swirl in November. “Is it a coincidence that Kendra's whole body is behind her mothers? If they want hide a pregnancy...they've done it well since you can't see Kendra at all," one person wrote on a Reddit threat. Another commenter added, “The fact that Kendra has her entire body blocked by her mother is making me suspicious already.”

As the couple revealed on Monday, it looks like the speculation was right all along. Joe and Kendra shared they are expecting their first child, due in 2018, in a video announcement from TLC. "We've got some exciting news," Kendra starts off the clip. "We're expecting!" Joe interjects. The dad-to-be continues:

I've always dreamed of having my own family, and it's really just kind of surreal that it's actually here. I kind of think it's going to be boy, but either way I'm happy to just have the baby.

Although the video didn't offer any specifics as far as Kendra's due date is concerned, it wouldn't surprise me if they welcomed their first child before celebrating their first anniversary. Because aside from Jinger and her husband, Jeremy Vuolo — who have been married for over a year without announcing a pregnancy, all of the other married Duggar kids had "honeymoon babies." As In Touch Weekly reported, Jessa announced her first pregnancy four months after marrying Ben Seewald and Jill announced her first pregnancy just two months after marrying Derick Dillard. Joe and Kendra are definitely doing life "Duggar style."