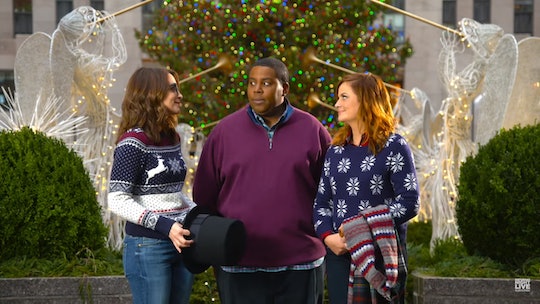 This weekend is going to be awesome, you guys: Alvin and the Chipmunks: The Road Chip is premiering on Friday, Dec. 18 (OK, OK, and Star Wars: The Force Awakens too), and ABC is airing the third Democratic Presidential Debate live from Manchester, New Hampshire on Saturday night! Or, if those TV events are not your cup of tea, you might enjoy Tina Fey and Amy Poehler's Saturday Night Live promo, which comes just days before the release of their movie, Sisters, which premieres on Friday. (Along with, you know, that space movie about robots.)

So now we’re wondering, what do the pair have planned for their episode? Will Sisters costar and former SNL cast member Maya Rudolph make an appearance? Maybe she and Poehler will reprise their regular sketch, Bronx Beat? Will Poehler and cast member Kate McKinnon meet for a Hillary Clinton-off? Will Michael Che and Colin Jost do the right thing and cede the Weekend Update desk to its rightful queens? (Probably not, but they should. I mean, really.)

One thing’s clear from their promo videos: This is gonna be good. Watch as straight man Thompson does his best to keep up with the two hilarious women: