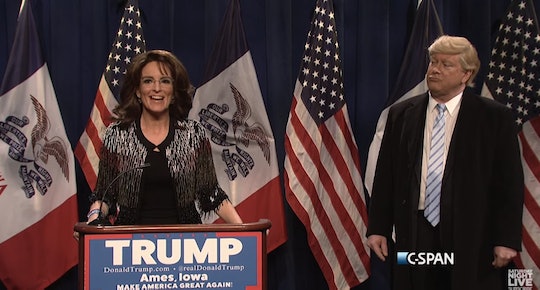 The dreaded Iowa caucuses are just around the corner (read: billions and billions of cheesy, patriotic campaign ads), but seeing Tina Fey play Sarah Palin on SNL this past weekend at least gave us something to celebrate. It wasn't too long ago that Fey donned her wireless glasses and northern accent to play the former Alaska governor, of course, but having the copycat version of America's most flamboyant hockey mom-turned-politico at a time like this provided just enough of a distraction from the current election season warring that it kept voters from wanting to jump off a cliff. And really — anything that can do that ought to be applauded.

All things considered, it's not like Fey's appearances of late have been totally unexpected. With the real Palin providing plenty of unintentionally hilarious one-liners over the past few months, it was really only a matter of time before SNL showrunner Lorne Michaels tapped Fey to stand in for the ex-vice presidential candidate on the comedy sketch show once more. So after a brief, yet hilariously perfunctory cameo last month, Fey strapped on the sparkly cardigan Saturday night for a real turn at the wheel.

Standing behind a podium emblazoned with current GOP front-runner Donald Trump's campaign slogan, Fey channeled her inner mama grizzly and gave her best impersonation of Palin at last week's uncomfortable Trump rally (you know, the one in Ames, Iowa where Palin endorsed the billionaire mogul and referred to the chaos in the Middle East as a series of "squirmishes").

"Thank you Iowa," Fey shouted, at a perfectly Palin-acceptable level. "I wanted to take a break from my full time career of writin' things on Facebook to fly down here and lend my support to the next president of the United States, Donald J. Trump!"

Trump, who was played perfectly by SNL alum Darrell Hammond on Saturday, responded as only Trump could — by complimenting Fey's Palin for her physique and making a sexist joke at a rival candidate's expense.

"Hey America, isn't she great? Just the total package: smart, legs, yelling, everything," he quipped. "I haven't seem a woman this impressive since Jeb Bush."

The sketch drew from Palin's actual endorsement speech last week — which, let's face it, didn't have to be changed very much to be 100 percent hysterical. Aside from a few comedically-enhanced lines (Fey's Palin chose to stand with "rock and roller, holy roller, pushing stroller with a abscess molar" in addition to complimenting "right-winging, bitter-clinging, proud clingers of our guns, our God, and our religion, and our Constitution"), Fey's speech could have easily been mistaken for the real thing.

"She's fun, she just says whatever she wants," Hammond's Trump said, speaking into the camera at one point, before accurately remarking, "It's like her mouth starts driving before her brain gets in the car."

Aside from being stunningly accurate (seriously, Fey's northern twang was on-point), the SNL sketch provided a welcome moment of relief from the terrorizing reality that is a potential Trump/Palin Washington partnership and a dystopian future where the GOP is essentially a caricature of its former self. Now if only we could turn off that comedy.

Check out the full video below: