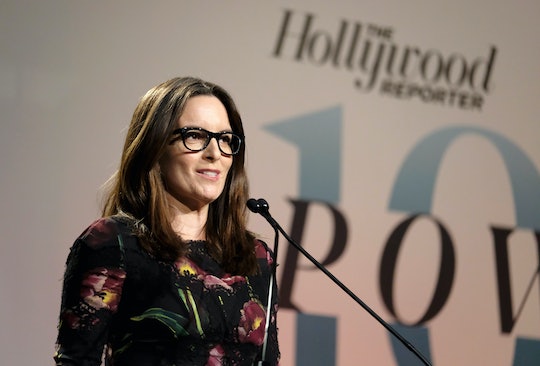 During a speech hosted by the American Civil Liberties Union on Saturday, the very hilarious Tina Fey got incredibly serious about one important topic — the election of Donald Trump. President Donald Trump's victory over Democratic nominee Hillary Clinton was a heartbreaking, confusing win for millions of Americans from all walks of life. During the speech, Fey got real about one group that had pushed Trump over the top and into the White House, one that many didn't expect to turn his way: white women. That surprising outcome is why Tina Fey's comments to white women are so important — because even if they didn't vote for Trump, their action and inaction going forward will affect other marginalized and minority groups, whether they realize it or not.

In her speech, Fey called out white women who voted for Trump, but additionally white women in general, according to CNN. The actress-writer-comedian extraordinaire also counseled them on their actions far beyond that November Election Day, and reminded them that, while their decision helped shape the future in a very specific way, they couldn't simply sit back and watch things unfold for the next four years:

The thing that I kinda keep focusing on is the idea that we sort of need to hold the edges, that its sort of like a lot of this election was turned by kinda white college-educated women who would now maybe like to forget about this election and go back to watching HGTV and I would want to urge them to like "You can't look away." Because it doesn't affect you this minute but it will affect you eventually.

As harsh as it sounds, Fey is right. 53 percent of white female voters voted for Trump in the 2016 presidential election. That's right, the majority of white women who voted in this election voted for a man accused of sexual assault (though, importantly, never convicted or formally charged) who has made attempts to restrict women's healthcare. Not to mention, Trump's 2018 budget proposals will have a major impact on women if and once they're passed.

It may be a tough pill to swallow, but these women should be held accountable for their actions moving forward, even if they didn't vote for Trump — because as Fey said, if Trump's policies and decisions haven't affected you so far, they will affect you eventually. In layman's terms, by sitting back and doing nothing, you're essentially damning yourself, too, whether you know it or not.

The demographics behind Trump's female vote are in stark contrast with those of his rival, Democratic nominee and former Secretary of State Hillary Clinton. According to The New York Times, 94 percent of black women and 68 percent of Latina women voted for Clinton. The sad truth is, Trump's presidency will have a major effect on the women who didn't ask for Trump to be president.

Fey, a college educated white woman herself, had an important final message of which all white women should take: "I personally will make my own pledge as a college-educated white woman to not look away, to not pretend that things that are happening now won't eventually effect me if we don't put a stop to it," Fey said.