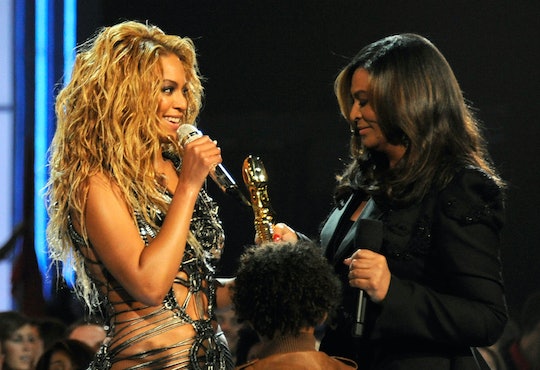 Tina Lawson Gushes About Beyonce's Twins, Because That's What Grandmas Do

Grandparents get the best of both worlds: quality time enjoying life with the little ones and little to no requirement to deal with the messy parts. The same goes for grandparents of celeb babies. In a recent interview, Beyoncé's mother Tina Lawson dished about being a grandma to the twins and shared how the whole family — including Blue Ivy — is doing since Rumi and Sir arrived over the summer.

In true grandmother fashion, Lawson was quick to gush over her grandchildren. When speaking with Entertainment Tonight earlier this week, she and her husband Richard shed some light on what the world's favorite twins have been up to since arriving this past June:

They're doing great. They are absolutely beautiful and so much fun. I mean, I haven't ever been around twins, but it's so cute, I can hardly take it.

Along with being royally cute, Rumi and Sir, who are now 4 months old, have quickly developed into unique little people. "It’s crazy ... it's just really, really different with two babies," Lawson told the outlet. "I mean, a boy and a girl ... They have very different personalities."

The twins aren't the only ones who have grown up in recent months. Richard shared that Blue Ivy has really come into her own as a big sister, saying:

It’s making her grow up, it’s bringing some maturity. She’s only 5, but you can see the transition in terms of her being a little more calm because she's the diva, but she's sharing her diva-dom.

This isn't the first time that Lawson has opened up about the twins. She also spoke with Us Weekly at the Habitat For Humanity Builder’s Ball in Beverly Hills this past September and talked about how well Rumi and Sir were doing at the time. "They are amazing," she told the outlet. "They’re very young but they like to touch and they’re adorable and just beautiful and healthy and I’m just so happy."

Knowing that the twins are spending time with their grandparents is reassuring to everyone concerned about the well-being of the Beyhive's newest members. Indeed, researchers have found that both children and grandparents benefit greatly when they share strong relationships — which appears to be case with Bey's family.

For instance, there are a number of mental health benefits for grandparents when they spend quality time with their grandchildren. One such study out of the Journal of the American Gerontological Society found that grandparents who are close with their young grandchildren are less likely to suffer from depression. This trend continues once the little ones grow up as well, as Boston University researchers found that close relationships between grandparents and adult grandkids also reduces depression symptoms.

It's beyond clear that Lawson loves her grandmotherly duties with all three of Bey and JAY-Z's babies. And much like almost every other grandparent out there, Lawson has been gushing about them since they arrived and is chock full of jokes. When the twins were born back in June, for example, Lawson shared a tidbit of this, telling E! News at the time:

Oh, the kids are wonderful but the best thing is that you can give them back.

There aren't many ways that the average family can be like the Knowles-Carters, but having close relationships between grandparents and grandkids is one. After all, every grandma or grandpa gushes over their kids' kids — just like Bey's mom has been doing since day one.