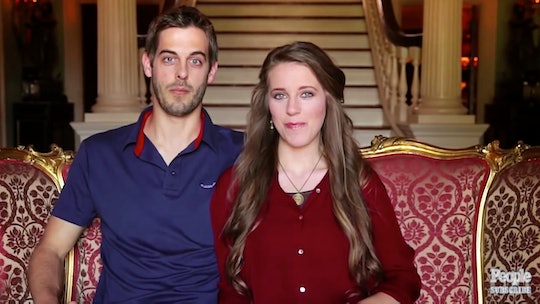 TLC's Response to Derick Dillard's Transphobic Tweets Will Give You Life

Fans of TLC's Counting On might be disappointed to hear that one of the stars of the reality series won't be returning for future episodes. Then again, maybe they'll be jumping for joy. Following ongoing tweets by the husband of Jill Duggar, the network released a statement that possibly marks the end of his relationship with the show. That's because TLC's response to Derick Dillard's transphobic tweets shows they won't tolerate hatred.

TLC/Discovery Communications and Derick Dillard did not immediately respond to Romper's request for comment about Dillard's recent tweets.

People reports the original controversy surrounding Dillard and transgender teen Jazz Jennings began with a Tweet posted by Dillard on Aug. 2. "What an oxymoron ... a 'reality' show which follows a non-reality," he wrote alongside a photo promoting TLC's I Am Jazz. The father of two continued, "Transgender' is a myth. Gender is not fluid; it's ordained by God."

Unfortunately, it wasn't long before Dillard was back at it again. On Oct. 26, one of his tweets innocently declared, "America needs unity now more than ever" — until Dillard replied on Thursday to a Twitter user's comment. This Twitter user pointed out that sometimes Dillard's messages can "come off as hateful," referencing Dillard's transphobic tweet from August. This prompted Dillard to start off on another rant.

“I pity Jazz 4 those who take advantage of him in order 2 promote their agenda, including the parents who allow these kinds of decisions 2 be made by a child," Dillard wrote, referring to Jennings by male pronouns. "It’s sad that ppl would use a juvenile this way. Again, nothing about him, just unfortunate what’s on tv these days." Dillard added, "I think it’s important to have a mature discussion. I am just expressing my concerns, as a Christian. The beauty of the world is that everybody is not like me."

(Yes, Derick. And believe me, we're all thankful for this fact.)

On Saturday afternoon, TLC took to Twitter to reassure viewers that Dillard's transphobic comments haven't gone unnoticed. In fact, it seems like they've already come to a pretty major decision. "We want to let our viewers know that Derick Dillard has not participated in Counting On for months and the network has no plans to feature him in the future," the network wrote. "We want to reiterate that Derick’s personal statements do not reflect the views of the network. TLC is proud to share the story of Jazz Jennings and her family and will continue to do so."

Jennings, 16, also responded (albeit indirectly) to Dillard's harsh words. On Saturday, she wrote on Twitter: “In the face of constant ignorance and hatred I prefer to disregard negative opinions and continue moving forward with love.”

You know, it's funny to me how Derick's on-screen persona is that of a loving husband, father and Christian. I mean, for the most part, he and Jill are just so likeable on both 19 Kids and Counting and Counting On. But seriously, now. What right does he have to invalidate the lives and experiences of other people with these types of comments — and to direct them a teenager, at that? Gender identity is real; it's not just a made-up concept up for debate. Sure, Dillard might be uncomfortable with gender fluidity, but that doesn't change the fact that it exists. That he continues to publicly bash a transgender teen as a grown man is incredibly troubling.

I know that Michelle and Jim-Bob Duggar's house rules don't apply once their children have married and moved out of their home. But perhaps the Duggars should extend the family rule banning social media beyond their kids' engagements — and start including their spouses, as well.