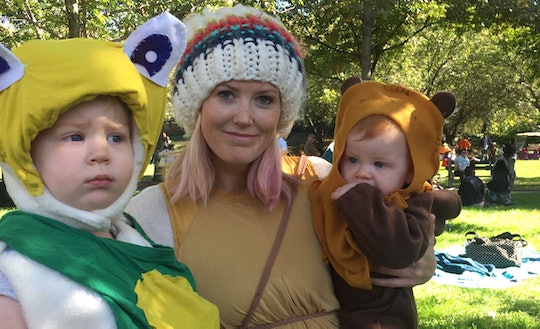 To All The Moms Who Think They Achieved Nothing In 2017

It's time to take stock of what we all achieved in 2017 and nooooooo. All I have to show for the whole shebang are a couple of jumpsuits I have almost peed myself in, a reel full of chin selfies with my babies, and a small mountain of apple-sauce squeeze packs somewhere in landfill. Everyone gets very thankful and bucket-listy about their year each December, and as a mom, it's a little bit shite to go over your achievements and tally up... nothing at all. I didn't run a marathon, earn a new degree, win a book deal, or go from being a suitcase girl on Deal Or No Deal to a future duchess. It feels — to me at least — as though I went nowhere at all in this year that tossed men out of towers, reshaped global relations, and saw Taylor Swift die and be reborn 25 times. It felt like everyone was hurtling forward toward the next big thing while I stood still.

If you have little kids, I bet you feel the same.

We are really bad about celebrating good moms in this country.

I have a 2-year-old and an almost-1-year-old, and my days typically start with my daughter trying to pee in her potty, and then her brother sticking his hand in it to splash around. We rush around trying to find pants for everyone, dish up Rice Krispies, and then drop the kids across the street before hopping to work on the pre-industrial hand-cart that is the New York subway. Nighttime is basically the same procedure in reverse, cycling through several more pairs of pants before we fall into bed. My parents send out a Christmas card every year with the highlights, and mine, I am sad to say, include "scooped human poop off a lawn with a doggie bag" and "flashed repairman boobs while nursing."

But when I look back on the constant buzz of anxiety that I didn't get anywhere or do anything great this year, I see that my son, who wasn't even born a year ago, can now climb onto the dishwasher door and throw books into the toilet (milestones!). My daughter, who a year ago only knew Twinkle Twinkle and Baa Baa Black Sheep, now makes up her own anarchical songs, spent Halloween confidently climbing stoops to demand candy dressed as a frog, and has begun to color all her school worksheets like they're a Phish poster.

The biggest achievements of 2017, if I'm thinking about it, are the ones that leave absolutely no damn trace amid all the published word counts, and Instagram fitspo posts ( 💪 ), and f*cking gourmet marzipaned birthday cakes people are Pinteresting.

For example, this year I did a lot of holding. At the time, I was thinking about other stuff — about how I'd like to put the baby down and pee, for example, or about how my diastis recti seems to be about the width of a loaf of bread because I did the kegel exercises once and then forgot. But looking back with the benefit of a few months' remove, I get that holding your kid is the thing. That's what you did, and what you achieved.

None of the things I realize were the biggest achievements of my year even register as achievements in our world: pouring attention on a mallet-wielding baby, day after day. Changing a diaper upside-down while your baby wheelbarrow-walks away from you giggling. Cleaning 8000 teeny-tiny nipples and straws and sippy-cup pieces each week like some sort of tiny-foods maniac. Playing and playing and playing enthusiastically with your kid when, let's be honest, grandpa would just read a newspaper and let them burrow under the couch.

Not one acknowledges the superhuman efforts involved in removing a fridge magnet from a toddler's mouth without causing collateral damage, and moms who lather banana out of their kid's head every night for 365 days aren't going to make any "30 Under 30" lists any time soon, but it still counts, is what I'm saying.

We took a recent trip to Disney World because my in-laws offered and, I don't know, why the hell not push a double stroller around a theme park the size of a city while hoarding $16 light-up bubble wands? People seemed very concerned that my kids "wouldn't remember" the trip, and that it was, for whatever reason, a "waste." But that's a weird way to look at early childhood in general. Our kids aren't going to remember their mom tandem-wearing two babies while walking the dog (0/10 would do again), but don't you think that the effort to keep her kids happy in that moment meant something? That the minutes you spent hiding under the coffee table in a drawn-out game of Hide 'n' Seek counted? (Disclosure: my daughter is not a great finder.) That the hours you spent cutting up grapes into really tiny frickin' pieces add up to something a bit wonderful?

Even as I failed yet again to finish a book this year, and you failed to do whatever it was your heart was secretly set on, I hope you can cobble together a sense of "oh, but there's something much bigger that I did than a stupid triathlon" (sorry, triathlons).

Moms often have nothing to show for the year but babies who are now toddlers.

We are really bad about celebrating good moms in this country. We are much, much more excited about giving book deals to white supremacists and focusing on people who live-vlog their journey unicycling across the country. But moms, you are doing a great job. You know the books your kid loves, and you know which jammies are right for the particular strain of global-warming on any given night, and you are the climbing apparatus of choice for your small, crazy offspring. No newspaper is running a piece called, "Area Mom Is Generally Hitting It Out Of The Park Once Again," but the moms I see around me are constantly doing that.

They're caring, and respond to their kids night and day with patience and larfs. They skin their knuckles hollowing out pumpkins, and ladle pee from potties to toilets likes it's an expensive bisque. They go apple picking because that seems like a picturesque childhood thing to do and then say "OK I GUESS I'LL MAKE EIGHT APPLE PIES NOW WHY DID WE GET A FULL BUSHEL WHY." They cook frou-frou infant zucchini pancakes only to find their toddler hates the things, and wind up feeding them Dr. Praeger's instead. They take little videos of their kids yelling out things like, "I have nipples!" and send them to a masterfully curated group-text of people who await this breaking news with excitement. They order Christmas cards that make their kids look adorable and them look like a tired 45-year-old pitcher.

Moms often have nothing to show for the year but babies who are now toddlers, and toddlers who now chat to themselves in the dark after they've gone to bed in long, impressive sentences. They have little kids who have become sweet bigger kids.

Making a good, kind human doesn't begin or end with Best of 2017 lists, or the rush to count down to New Year's, it's a marathon of care. No one tends to congratulate you on that basic, ongoing achievement, even as you think about yelling to your protesting toddler who wants to be picked up while you nurse, "You're welcome for me making you a sibling for life!"

But I've achieved things as a childless maniac, and I've been a mom, and the latter is far, far more work, and far, far more impressive. Moms, it's been a banner year.