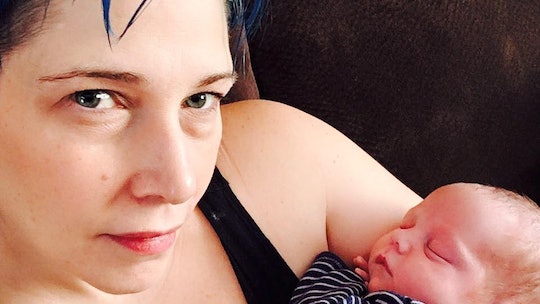 To Be Honest, I Should Have Become A Mom Sooner

Deciding if and when to have kids is as personal a decision as they come. When I was 26-years-old and newly married I agonized over when my husband and I should try to conceive. I wanted to make the "right" choice, and worried that if I made the wrong one my future baby would suffer. There were so much things I wanted to do first, too — career, travel, house, money, fun. But now that I'm a mom I know that you’re never entirely ready for parenthood. And in the end, I think I should have become a mom sooner... for a variety of reasons.

That's not to say I'm not happy with my life the way it is now, because I am. I love my kids, and I probably wouldn't be the parent I am today without having the life experiences I had before they were born. I traveled the world as a kid-free adult and, as a result, was able to really understand what I wanted in life and who I was as a person. In other words, I don't know if I would have been a great mom if I had kids when I was 20 or 25.

That's not to say that young moms are necessarily bad moms, of course, or somehow not as capable as older moms. Some of the best moms I know (including my own) were young when they had kids. But young me? Well, she probably would have stumbled a bit.

I’m don't really believe in fate, or that things happen according to some grand plan or "for a reason." I do wonder, however, if my life as a mom would have been easier if I had my kids sooner. Like, maybe I would have ended up in the same place, with the same great kids, but after taking a different, less stressful route.

I feel pulled in multiple, often-competing directions on a daily basis, wondering if I am "too old for this sh*t" and, as a result, somehow letting my kids down.

Because while I love my life I have to admit that some parts of being an older mom really suck. I’m so tired, to the point that I can’t adequately communicate how tired I am. I’m 40 years old, but sometimes it feels like I'm 80 and I know it's because I haven’t slept through the night since Barack Obama‘s first term as president of the United States. When I was younger I could handle the whole "no sleep" thing in stride, and get through a day with a few extra shots of espresso or a nap on the weekend. But now? Well, now there is no reprieve. I'm constantly tired and dealing with a never-ending list of responsibilities that don't afford me the luxury of taking a nap or a break.

At my age I don’t always have enough energy to keep up with my toddler, school-aged kids, and my preteen all at the same time, either. I feel pulled in multiple, often-competing directions on a daily basis, wondering if I am "too old for this sh*t" and, as a result, somehow letting my kids down. But I can't go back in time and I'm not getting any younger, so there's not much I can do but soldier through and hope for the best.

When I'm scrolling through social media I notice people I went to high school with posting pictures of their kids in college or, if you can believe it, their new grandkids. They are enjoying their lives without worrying about things like diapers, homework, soccer practice, and choir concerts. And if I had kids when I was in my early 20s my kids would be headed to college, too. I wouldn't be in the trenches of motherhood. Instead, I would have my pre-kid life back. I would have my sleep. I would have more energy. I would have some freedom.

When you make the choice to have kids later in life you not only change your future, but you change your kids' future, too.

Of course, all moms are facing a series of struggles, regardless of how old they are or how old their kids are. And I am sure that parenting teenagers or worrying about sending your kid off to college or watching your baby leave the nest is no picnic. Parenting is nothing if not a seemingly endless list of challenges you're tasked with adapting to and overcoming. But I can't help but envy my friends' ability to go out on dates their partners without a huge ordeal of finding a babysitter, or travel to a far-off country on a moment's notice.

Perhaps I'm thinking about the past and "what could've been" because I've been so forced to contemplate the future in a new, terrifying way. Now that my kids are in school I'm stuck at home, wondering what I want to do moving forward. The thought of re-entering the workforce after working part-time is scary, and the idea of going back to school or starting a new career in my 40s is exhausting.

I also wonder about our family's future. I think every older mom has done the math and calculated how old she will be as her kids grow up and meet different milestones. It’s hard to imagine that you may not be alive to see your great grandchildren born, though. With every choice we make, as parents and as human beings, there are consequences... both positive and negative. When you make the choice to have kids later in life you not only change your future, but you change your kids' future, too. And now that I'm looking forward to a life without my kids at home, I'm wondering if my decision to have them later in life was the best decision I could have made for all of us.

But I did get to travel, learn about myself in a truly authentic and all-encompassing way, become financially stable, and start a career prior to having children. I was able to grow into the mom I am now; a mom I might not have been if I had children much earlier in life. So while I am a bit remorseful that I didn't get an earlier start on motherhood, in the end I know that I wouldn't change a thing. Hell, I couldn't even if I wanted to. So I’m going to make the best of my life and enjoy my family just the way we are: running on zero sleep and only a few regrets.