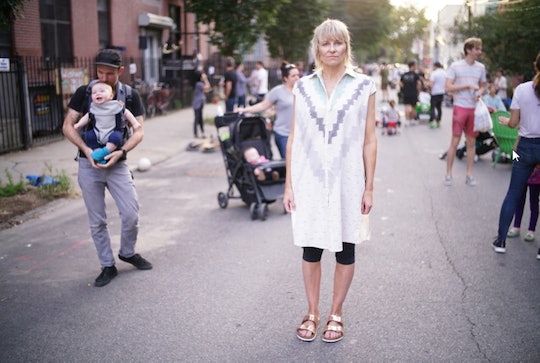 The decision of whether or not to have children is personal and complex. And the decision to not is still considered taboo by many, which is what an upcoming documentary about living childfree, To Kid Or Not To Kid, aims to confront head on. In an exclusive look at the film's trailer shared with Romper, viewers are given a peek at the multifaceted reasons behind why some choose a childfree lifestyle, the backlash and shame many experience when they do, and the unfair pressures society puts on women to reproduce.

The goal behind To Kid Or Not To Kid, set to release on Nov. 15 in New York City and Los Angeles, is to debunk the myths that choosing to live without children is "weird, selfish, or somehow wrong." Directed by Maxine Trump, who was named as the New York Times Critics’ Pick for the documentary 2012 Musicwood, the upcoming film explores the implications of choosing to live a life without kids in a world that expects reproduction.

As a woman without children herself, Trump candidly shares her own experience with viewers while taking them on a tour of the treacherous terrain of deciding whether or not to have children. "I always put off my decision to have children ... I've spent my life surrounded by children. But if I ever considered not having them, it's really hard to talk about," Trump says in the trailer. "So I started asking the question, 'Why can't we talk about not having children?"

After first sharing her own experience in the trailer — including scenes of someone who appears to be her mother suggesting that not having children would be "selfish" — Trump talks with two other women who've also made the decision to not have children: Megan, a women who struggles to get medical permission to undergo elective sterilization, and Victoria, who faced backlash for publicly acknowledging that she felt she made a mistake when she had a child.

In the course of sharing their stories, Trump also gives viewers a look at the intense cultural pressures women face, the harsh criticism childfree women regularly experience, and the personal impact that going childless may have on her own relationship. For example, the trailer skims over awful comments left on her Facebook page, such as "you don't deserve to have a uterus" and "you're basically useless on earth if you don't produce a child."

To Kid Or Not To Kid also touches on a trend that has alarmed demographers and social scientists in recent years. The number of babies born in the United States dropped in 2008 when the recession hit and has continued to do so over the years, The Washington Post reported. But once the economy recovered in 2016, experts had expected women to start having more babies. But as research shows, that didn't necessarily happen.

The U.S. birth rate is on a decline, according to the U.S. Centers for Disease Control and Prevention, suggesting that more and more women today are choosing to not have children for a variety of valid and personal reasons.

In the face of these statistics, however, critics often accuse women who choose not to have children of being selfish and promise them that they'll either change their minds or live to regret their decision. But as the trailer for To Kid Or Not To Kid shows, the truth is much more complicated and oftentimes misunderstood.