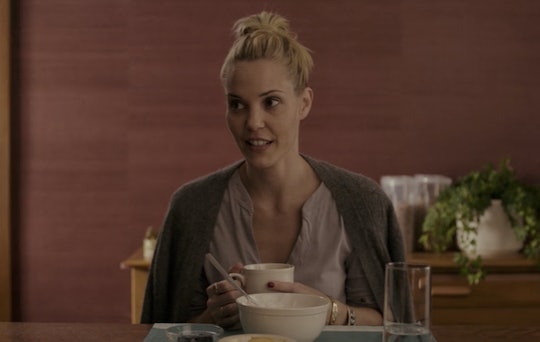 The other night, my son ran his tiny, pudgy finger across the two scars on the knuckles of my right hand. "Mommy, you hurt?" he asked, looking up at me with both confusion and concern in his eyes.

"No, my love. Those are just mommy's special scars," I said. He didn't ask any more questions; to him, my answer was sufficient.

My son is 2 years old, so it's too early to tell him my scars are the result of bulimia. It's too soon to explain to him that this is an illness I will struggle with throughout my life. But it was fitting that he asked me this question on the night I sat down to watch Netflix's new original movie To the Bone. I found one particular storyline to be a heartbreakingly accurate representation of the all-consuming power of an eating disorder, and how that power unfortunately cannot be stifled by the promise of motherhood.

WARNING: This piece contains spoilers for To the Bone.

In the film, Megan (Leslie Bibb) is a patient at a somewhat unconventional "halfway house" for people struggling with disordered eating. Megan is somewhat older than her fellow housemates and is unexpectedly pregnant. Early on in the film, Megan seems somewhat ambivalent about her pregnancy, and is hesitant to celebrate a positive pregnancy test because she has yet to pass the 12-week threshold. During dinner time, Megan wryly comments that thanks to the pregnancy, "at least she knows things are working down there," a reference to the fact that eating disorders can cause women to stop having regular periods, a condition medically known as amenorrhea.

As the film progresses, however, Megan appears to be more excited about the pregnancy. She reveals that her in utero daughter is 12 weeks and 1 day old, and she has picked out a name. She even allows the other patients to, finally, throw her a baby shower, and Megan seems genuinely happy to become a mom. In one notable scene, she expresses her belief that pregnancy and motherhood will lead her to develop more normal eating habits. She even tells Ellen (the main character, who is played by Lily Collins) that she's looking forward to "thinking about someone more than herself." In one particular scene she even forced herself to eat some mashed potatoes, "Miracle Potatoes" the groups calls them, for the sake of her unborn child.

I thought that my love for my child would overpower my need to starve and purge. My motherly instincts would take over and my innate desire to protect my child would trump my urge to control my life through disordered eating.

Megan's optimism is incredibly poignant. But I know from my own experience that pregnancy doesn't have the power to "fix" disordered eating, and neither do the responsibilities of parenthood. When I found out I was pregnant, I was allowing myself to eat just one meal a day, and directly following that meal I would make my way to the bathroom to force two fingers down my throat; scraping my knuckles against my front teeth until they bled, then scabbed over, then peeled, then bled some more. I had been forcing myself to purge after the small meal I allowed myself to eat on and off for six years, a reaction to living with a physically abusive father and, years later, being sexually assaulted by a coworker. I sought to make myself smaller, to take up less space, so the men in my life wouldn't hurt me or even notice me.

But as I held that positive pregnancy test in my hands, my supportive partner by my side, I silently told myself, "This is it. This is the end." I just knew I would eat for the fetus my body would transform into a child, and I was convinced that once I brought that child into the world, I would love him or her too much to continue to kill myself. I thought that my love for my child would overpower my need to starve and purge. My motherly instincts would take over and my innate desire to protect my child would trump my urge to control my life through disordered eating.

For the duration of my pregnancy and for four months after my son was born, I stopped starving myself and purging after meals. It was difficult, to say the least. I cannot take credit for forcing myself to eat while my son developed inside my body: the nausea made eating nothing short of a necessity, and after experiencing a few pregnancy complications, my fear of losing my child sufficiently overshadowed my fear of gaining weight.

For four months after my son was born, I focused on breastfeeding and keeping my newborn alive. For four months, I eyed the closest bathroom and forced myself to remain in my seat at the dinner table. Then, during a family trip to my son's grandparents' house, my partner's mother asked if I "really needed a second helping" of dinner. It had been four months, after all, and I had yet to "lose the baby weight," she said. In that moment I felt completely out of control of my own body, and I knew there was one way I could get that control back.

Despite Megan's desire to be a mother and the excitement around her pregnancy, she could not keep herself from purging. The miracle potatoes weren't enough. Her love for her unborn baby wasn't enough.

I relapsed and threw up every meal I eventually forced myself to eat for an entire year. I hid my binging from my partner. I'd claim I was too tired to eat, and I'd blame my inability to find time to make myself a meal on the responsibilities of taking care of another human being.

I had thought becoming a mom would cure me of my eating disorder. I was wrong, though, and my inability to make my imagined future a reality was mirrored in Megan's storyline. In the middle of the night, after her celebratory baby shower, the characters in treatment hear desperate screams and pained crying. Ellen and her romantic interest, Luke (played by Alex Sharp) open the bathroom door to find Megan on the floor, crying, blood on her pants and the eggshell-colored tiles of the bathroom floor. She had miscarried. Between sobs and incoherent pleas, Megan cries, "I thought I was safe." Despite her desire to be a mother and the excitement around her pregnancy, she could not keep herself from purging. The miracle potatoes weren't enough. Her love for her unborn baby wasn't enough.

Popular culture tends to view motherhood through a gauzy, oversimplified lens: it's the white knight of life choices, a decision that will erase all your problems and replace them with baby snuggles and divine purpose and a maternal sense of self. But in To the Bone, it's clear that motherhood is not a cure for eating disorders. It wasn't enough to keep Megan from purging after she ate, and the birth of my son wasn't enough to keep me from doing the same.

That's because eating disorders are an incredibly resilient force. ABC News reports that 1 in 20 women will suffer from an eating disorder while pregnant, and researchers at the University of Toronto report that the relapse rates of anorexia nervosa range from 9% to 65%. According to the National Eating Disorders Collaboration, the amount of time a person has lived with an eating disorder, their age at the onset of their eating disorder, low self-esteem, and negative and/or stressful life events (including the birth of a child) can all impact the risk of relapse during recovery.

There is no end point, no "quick fix" and no "one thing" that will make my eating disorder magically disappear.

I have since tried to get myself "back on track," i.e. eating the way I did when I was pregnant (which is to say, eating and actually keeping that food down). I have had some success, but I have also had setbacks. I have gone long stretches where I find myself eating "normally," only to be triggered by my son's tantrums or an overwhelming workload or a fight with my partner, and I end up relapsing. I have more work to do, and I know enough about healing to know that my work will never be finished.

This disease, which has the highest mortality rate of any mental illness, will be with me forever, and the fight to combat it will be cyclical: there will be no end point, no "quick fix" and no "one thing" that will make it magically disappear. Even my son. Acknowledging the capability of that force doesn't diminish the love I have for my child. Instead, it gives me the power to one day, eventually and when my son asks about the scars on his mother's knuckles again, answer him honestly.

I have an eating disorder, and although I love my son, the only thing that can truly combat my illness is the love I need to have for myself.

If you struggle with an eating disorder, please seek professional help. You can also call the National Eating Disorders Association Helpline at 1-800-931-2237.