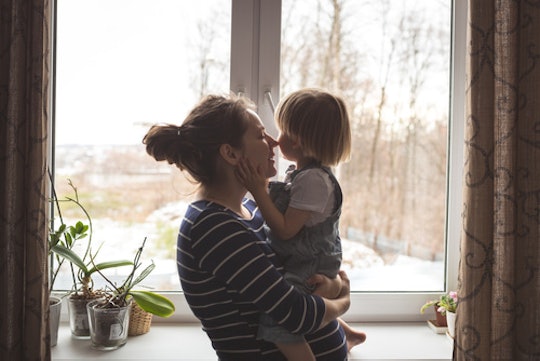 To The Mom Who Refuses To Be "Chill"

Once, a kid chased my son down and bashed him on the head with a rock, leaving a bloody dent that would later become a scar. As I determined whether he would need stitches, the kid's mom apologized. "It's no big deal," I told her.

Of course, that wasn't true — it was a very big deal. I wanted to shout to his mom that her kid was an antisocial bratbox, and because of him, my kid was going to have a scar. But that would have been rude. That would have been uncouth. It wouldn't have been chill.

Instead of screaming, the Chill Mom gets down on her kids' level. She speaks softly. She tells them that this is a bad idea, that they do not want to do this, and they should 1) apologize and 2) ask what they can do to make it better. She does not threaten, shout, take away toys, or institute time-outs. She's creative. She's in control.

The Chill Mom does not say ‘no’ when she could say ‘yes.’

The Chill Mom does not say ‘no’ when she could say ‘yes.’ Yes, her three-year-old can eat his lunch at 10:00 a.m. while all the other kids stare and salivate. Yes, he can have an extra cookie, the only cookie. And even though she might think he's being a little bastard, she'll never call him that. Instead, she'll smile and laugh gently, gently.

The Chill Mom responds to every injury with a breezy, "Hey, it's no big deal," and some cuddles. Even when some punk kid punches her kid in the face, right in front of the adults, then looks back at her to see what she'll do. She's smooth. She's buttah. She comforts her child and assures the other mom that it’s no big deal, even as the black blooms around her son’s eye.

The Chill Mom is motivated by one and only goal: to not be thought of as the Un-Chill Mom. The mom who yells at her kid in Target, who makes all the other moms wonder why she's lost her temper. You're always embarrassed for the Un-Chill Mom. You wonder if she parents like this all the time. If you hear her threaten her kid, you judge her even more. That poor kid, you think. No matter what he did, it can’t be as bad as all that. He’s just a kid. He doesn’t have self-control. And neither does his mom, apparently.

She is Chill Mom and she is Handling It. She won't cry, at least not until she gets to the car and no one can see her.

If the Chill Mom's child has a tantrum in Target, she doesn't yell back at him. She can only hiss at him under her breath, the grin still plastered on her face. If the tantrum gets really bad, she takes her munchkin out, thrown over her shoulder or tucked under her arm like a football, on a long walk of shame while he screams and kicks her. If people look at her, she casts her munificent smile upon them and says, “He’s having a bad day.” Then they will nod and smile back, because she is Chill Mom and she is Handling It. She won't cry, at least not until she gets to the car and no one can see her.

Not only does Chill Mom never, ever yell in public, she never admits to yelling, either, because that is a transgressive act on par with downing too much wine before the PTA meeting. People will try to trap her. They will ask how she disciplines her kids. She blinks once and blurts out, “Natural consequences," meaning her child will face only the logical consequences of his actions, but no punishment. Her house is calm. Her house is chill, a state that requires a level of self-control generally only attained with the use of pharmaceuticals.

You can try to be Chill Mom, but in the end, no matter how calm and unruffled you are, eventually the facade will crack. Whether you're on a playdate or at Target or at the playground with a little brat who tries to hurt your child, you will raise your voice. You will lose your cool. Everyone will pretend they didn’t see it. They'll look away, as if you just vomited on the floor or scratched your crotch in public. Because you must be calm at all times. You must be chill. After all, you’re Chill Mom. Chill mom never cracks. And it’s absolutely and totally exhausting.

Say what you will about Un-Chill Mom, but Un-Chill Mom knows how she feels and shows it. Un-Chill Mom yells when she's angry at her kids. She cries when she's faced with a Target tantrum. And she probably says the f-word if the situation merits it. Chill Mom may seem to have it all together, but I'd rather have the freedom to tell someone off, cry at a mean comment, or shout at my kids if they do something terrible. In the end, I'll take Un-Chill Mom any day.

More Like This
17 Best Potty Training Products For Toddlers
From Captions To Gifts, These Are All The Kindergarten Graduation Ideas You Need
These High School Graduation Speeches Will Give You Hope For Our Future
Grace Farris Wants to Talk About Her Air Fryer