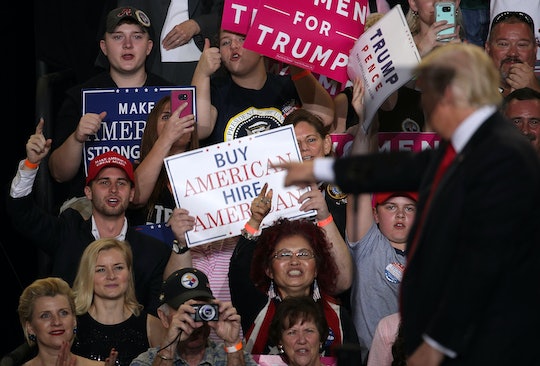 Don't Congratulate Me On My Pregnancy If You Voted For Trump

After I announced my pregnancy three years ago, you were all quick to congratulate me on Facebook. It was a moment of celebration for me, and your comments brought me so much joy. But now, I am disheartened by your presence on my feed. Because I know that you voted for Donald Trump.

Thanks to President Trump's American Health Care Act (AHCA), which just passed the House of Representatives, pregnancy is now considered a preexisting condition. That means that if the bill passes the Senate and is signed into law, insurance companies might not cover me, a woman who has been pregnant, as well as 24 million people who are also in danger of losing their health care coverage. So while I might've appreciated your warm wishes regarding my pregnancy in the past, your kind words now seem incredibly hollow.

To be fair, I know none of you could have predicted this. I can't fault you guys for failing to have a crystal ball that would have gifted you with a grim look at our current reality. But at the same time, I know that to a certain extent, you should've seen this coming. President Donald Trump ran on the campaign promise that he would repeal and replace the Affordable Care Act — which, according to the Department of Health and Human Services, insured an additional 20 million people between 2010 and 2016, regardless of their medical history. So if you voted for Trump, you did so with the knowledge that the Affordable Care Act would likely be repealed, even though such an act would likely "take away medical insurance from millions of Americans and leave the more-than-$3 trillion U.S. healthcare system in disarray," according to Reuters.

If I lose my job or if there's a lapse in my coverage for any reason, I could be denied health insurance because I chose to get pregnant and bring my son into the world. If I choose to get pregnant again, according to CNN, the AHCA could "allow insurers to charge higher premiums based on medical history," meaning the cost of my pregnancy would rise dramatically. In fact, under the American Health Care Act, the cost of a pregnancy with no complications could potentially increase by 425%

One more than one occasion, you have called my son a blessing. Do you now see him as a preexisting condition?

"States could allow insurers to set much higher rates for patients who have a preexisting condition. That's terrifying, because patients could in essence be priced out of coverage," Dr. Lena Wen, the Baltimore city health commissioner, told NBC News. That means I could simply continue to work and parent my son, and still lose my insurance. So could my 2-year-old son, who is insured through me.

At one time, I was excited to tell you about the kicks I was feeling. I was excited to show you the ultrasounds I proudly posted online. At one time, when I shared my pregnancy struggles with you, including a necessary Chorionic Villus Sampling (CVS) to determine if my son had Down Syndrome after an abnormal ultrasound, a fetal echocardiogram to determine if my son had a heart abnormality, three hospital stays to stave-off pre-term labor, and an extra postpartum stay at the hospital to ensure my son could breathe and regulate his own body temperature properly, you were kind, compassionate, and quick to help.

When a woman announces her wanted pregnancy to her friends and family members, she deserves to feel excited about it. She does not deserve to feel like her choice to become a mother will keep her from ever securing health insurance again.

I wonder, now, if you would help pay for a CVS, which costs between $1,400 to $2,000. I wonder if you would pay for my fetal echocardiogram, which, on average, costs $1,017. I wonder if you would foot the bill for my three separate stays at a hospital (one lasting a week), which averages to $3,361 per day in the state of Washington, as well as the cost of a three-day hospital stay in order to give and recover from birth.

On more than one occasion, you have called my son a blessing. Do you, now, see him as a preexisting condition?

Maybe you've never been pregnant. Maybe you've never gone through childbirth. Maybe you're young, perfectly healthy, and financially well-to-do, in which case this health care plan will be beneficial for you. If that's the case, I should implore you to think of the women in your life who will be screwed by this bill; to think of your mother, sister, wife, girlfriend, or even me. I'm not going to, though. If you need a personal connection to someone affected by this horrible piece of legislation in order to care, I refuse to be that person for you.

That said, I still hold out hope that you are just as appalled by the passage of this bill as I am, like the Trump supporter who texted me the night the American Health Care Act passed the House, asking me for more details about preexisting conditions and encouraging an honest, open, mindful discussion. If you are reading this, you said you would fight this piece of legislation, and after, you apologized for voting for Trump in the first place. You promised you would call your representatives, and you thanked me for those resistance posts and passionate calls to action I was sure you were overlooking.

Regardless of who you are, Trump voter, I think we can all agree that when a woman announces her wanted pregnancy to her friends and family members, she deserves to feel excited about it. She does not deserve to feel like her choice to become a mother will keep her from ever securing health insurance again. So the next time you congratulate a woman on her pregnancy, please remind yourself that if you were really happy for her, you wouldn't support the man who is punishing her for getting pregnant to begin with.

More Like This
Chrissy Teigen Gives a Cheeky Behind The Scenes Peek Into Her Pregnancy Glam Squad
Dr. Jill Biden Just Delivered Some Frank, But Powerful, Advice On Motherhood
Reddit Applauds Mom Of Five Who Stood Her Ground & Left Sleeping Dad Behind
Banana Boat Sunscreen Has Recalled Products That Were Found To Contain Benzene