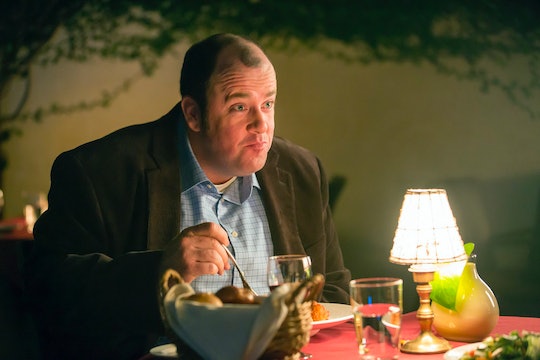 Toby's Fate Is Finally Revealed On 'This Is Us'

It was a devastating moment to see Toby fall to the floor on Christmas Eve during the midseason finale of This Is Us and it left many fans wondering what would happen to Kate's sweet love interest when the show returned. And sure enough, it didn't take long for Toby's fate to be revealed on This Is Us when it returned on Tuesday evening and I'm happy to report that he is in full recovery mode from his arrhythmia. That's right, my friends — Toby is alive and well on This Is Us and it is definitely not what many people expected. Not because we didn't want to see Toby recover so quickly, but rather because we didn't believe the show would let us off the hook like that.

As wonderful as this series is, it loves to play with — and yes, sometimes even stomp all over — our emotions. So I definitely thought we had a lot of tears and worrying ahead of us before we could ever think of Toby being on the mend. In fact, I thought this was going to play out by putting Toby in a coma. But here we are and I am so not complaining. Hey, we gotta appreciate these happy moments when they come around, right?

Though it had appears as though Toby had suffered from a heart attack, evidently it was only a mild arrhythmia. But while he was almost immediately back to his old self when the episode kicked off, it wasn't all good news when it came to his health. According to his doctor, there's a small hole in his heart (he said it more technically than that, but that's basically the gist), and it needs to be treated, giving him one of two options. Toby can either choose to be put on medication for it or he can have surgery to fix it. The doctor suggested the latter even though it's more of a serious procedure, but Toby was none too thrilled about it.

At first he was very resistant to the idea until Kate snapped him out of it and made him realize that this is a fixable situation. It's in his control and he should take every precaution to take care of himself. So he had the surgery and again the show surprised us by allowing him to come out of it OK. In fact, he and Kate have now even exchanged "I love yous" because of it. He said it before going into surgery and Kate said it when she thought he was still asleep in recovery. They even discussed the possibility of getting married. Toby said he would marry her in a heartbeat (and then I immediately burst into tears).

It's unclear right now if that was just talk or if walking down the aisle will be something in the immediate future for the couple, but for right now the most important thing is that they're together and Toby has a future to contemplate.