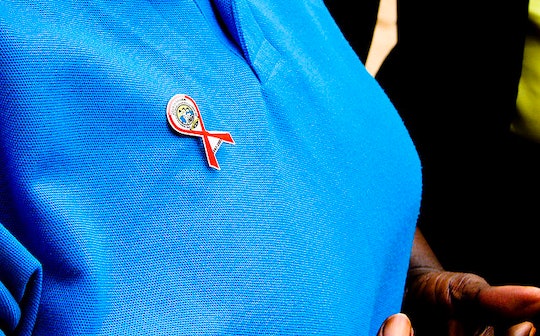 Despite increased aware over the past few decades, there is still a stigma surrounding AIDS, which can lead to people foregoing treatment. Fortunately, our best weapon against this is to provide people with information. And since Tuesday, Dec. 1 is World AIDS Day what better day than today to debunk the biggest myths about HIV and AIDS.

According to the World Health Organization (WHO), there are currently 35 million people living with HIV or AIDS. Though we’re becoming more educated on how the disease operates, it still has a devastating mark on countless people. To our dismay, the Organization has given us a larger glimpse on its influence:

Before delving into some myths about AIDS, let’s break down some rudimentary facts about the condition. For starters, AIDS stands for Acquired Immune Deficiency Syndrome. And though you may hear some people use HIV and AIDS synonymously, they are not the same thing. In fact, AIDS is caused by the Human Immunodeficiency Virus, or HIV.

Though there are countless groups committed to educating the public, there is undoubtedly plenty of myths about AIDS aside from how it’s related to HIV. Here are five common misconceptions about HIV and AIDS, refuted to help decrease irrational panic and shame when talking about HIV and AIDS.

While many men display symptoms if afflicted with an STD, The Office On Women's Health notes it can take up to ten years for HIV symptoms to become visible. Thinking a man "knows" he has HIV is dangerous for not only him but his partner(s), as the disease can be spread without his knowledge. WHO recommends using a condom, as it decreases HIV risk by 80 percent.

2. Drug Therapy Isn’t Necessary Until You Get Sick

When it comes to HIV andAIDS, early action is key. To keep your immune system in tact, it is best to start antiretroviral therapy (ART) immediately and to take medications everyday. “There is a dramatic impact on a person’s health and well-being throughout their life if they start HIV treatment immediately,” Owen Ryan, executive director of the International AIDS Society, told CNN. He added that being proactive not only benefits the person but is a larger public health issue. He continues:

And it’s not just for them, it’s for their families and partners as well. People who are on HIV treatment who are responding well to treatment, they are 96 percent less likely to pass on HIV to their partners.

3. A Straight, Non-Drug User Doesn’t Have To Worry About HIV Or AIDS

While many people believe that homosexuals and intravenous drug users are the only ones affected, the AIDS Action Committee points out that plenty of heterosexual individuals are afflicted by HIV/AIDS, as well as non-drug users. It’s important to echo that protected sex significantly decreases your risk of being affected.

It is undeniable that a ton of advances have been made on the HIV and AIDS front in a rapid amount of time. However, there is no cure for either HIV or AIDS. Fortunately, if proactive, comprehensive care is started, it’s possible for someone to have small amounts of the virus in their blood or have their condition put into remission, according to Penn Medicine. However, they warn that it’s still possible for someone to transmit the virus, despite how low their viral load may be.

5. AIDS Is An African Issue

Though the American Medical Student Association reports 70 percent of people with HIV/AIDS live sub-Saharan Africa, the pandemic is anything but an “African problem.” The group says socioeconomic, trade, and colonialism has caused an increase in HIV/AIDS cases. They also highlighted several other factors:

HIV/AIDS continues to spread in the rest of the world, especially in countries or communities within countries where poverty, inequality, and conflict are prevalent. Eastern Europe and Central Asia have the fastest rates of spread, followed by countries in Asia and the Pacific, the Caribbean, and Latin America.