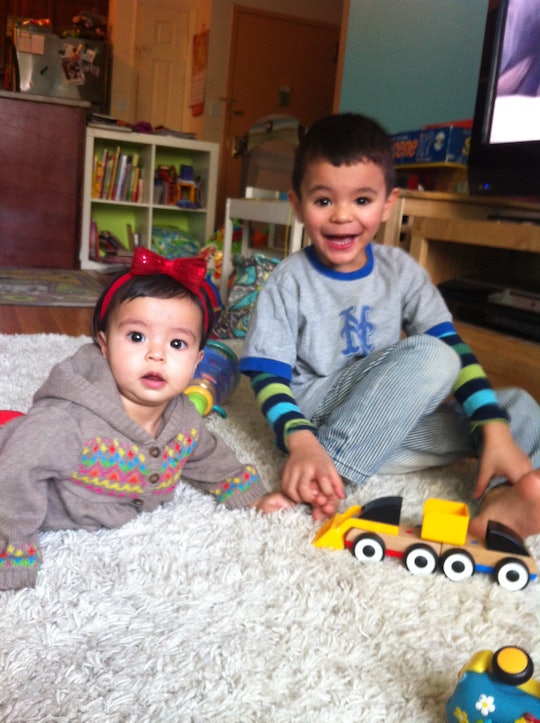 When I was pregnant with my second child, I was terrified of how it would impact my toddler. He was about to go from the center of the universe to a part of a duo. He would be expected to share time with me, his toys, and his space. I never worried that he would lash out or be anything other than the sweet boy he'd always been, but I did wonder if he'd get jealous, and what that would look like. I didn't know about the subtle ways toddler behavior would change after a new baby, or when I should be concerned. I only knew that I was.

I thought that I'd prepared my baby the best that I could. Or at least as best as you can explain anything to a 2-year-old. We talked about how Mama was having a baby, and that he'd be a big brother, and that the new baby would probably be noisy and demand a lot of Mama's time. I naively assumed that the rest would work itself out, and that we could deal with it. I didn't expect my independent toddler to suddenly become incredibly clingy, or that he would refuse to get in the car if I'd already put his sister in her car seat. I had no idea that these behaviors could be the manifestations of jealousy, and not a true behavioral shift.

As parents, we're trained to look for the hard facts. We want to make sure that our toddlers are being safe with the baby, and that everyone is healthy and hale. We teach our children about choking hazards and how they should hold their baby brother or sister. In the hubbub of a new baby, it's easy to understand how the smaller signs could go unnoticed. It's even easier to see why we wouldn't necessarily associate these signs with jealousy. After all, they tell you that they love the baby, and they're so interested in what the baby does. That must mean that jealousy isn't a problem, right? Not so fast.

I contacted Caroline Artley, LCSW-C, a maternal and family counselor in White Marsh, Maryland. She tells Romper, "Any change in normal behavior can indicate the older sibling is feeling 'some kinda way' about the new baby." It's not just the typical signs we think of when we consider sibling rivalry. They might not just turn into an older sister hiding the baby's Fisher Price play phone in the closet overnight — that level of jealous behavior takes years to achieve. (And I did eventually go into the scary closet to get it, so take that, big sister.)

Instead, Artley says that "parents might notice an older sibling more irritable, tearful, withdrawn, aggressive, or oppositional." With my son, when he was struggling with jealousy, he would become weepy and clingy. We even went through a potty training regression that our pediatrician chalked up to him wanting more attention — like the baby was getting.

Artley says the most common presentation of jealousy is similar to what I experienced with my children. "Specifically, a child may try to insert him or herself into the baby's feeding, diapering, rocking, playing, and even — heaven forbid — sleep regimen all in an attempt to be included and seek attention." They are extra interested in the baby because they see where your focus lies, and they want in on it.

Yes, they may have tantrums, all-out meltdowns, and want to be the star of their own show when others are around. But just acknowledge that, Artley notes, and don't delve too far into interpreting their meltdowns. "The sibling is being flooded with new experiences causing new emotions that she or he does not yet know how to navigate." This is a time to show grace to your child. While discipline and intervention may be appropriate, so is kindness, and maybe a little extra time with Mama tonight.