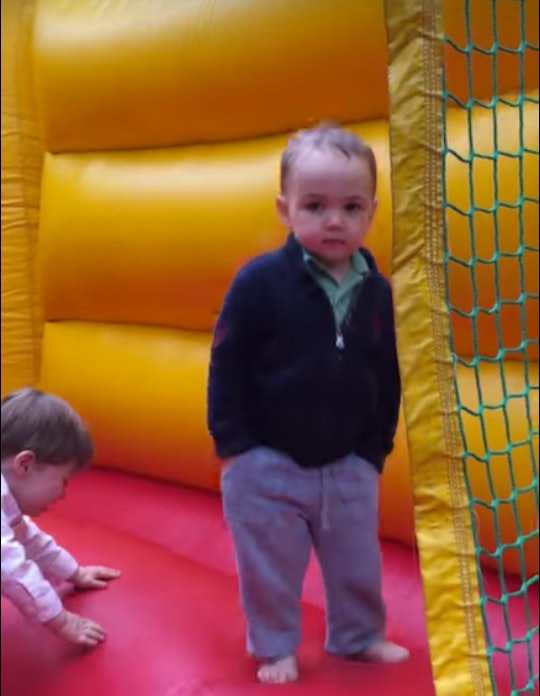 Hero Toddler Chills In Bouncy House Like It's NBD

Given the current state of the world, it's no surprise if you've been vacillating between emotional extremes lately. If, like me, you spent half of last night crying about the political dumpster fire on display, and the other half giggling like a maniac at Master of None, you should definitely check out the video of a toddler chilling in a bouncy house that has been making its way around the internet. The rumors are true: This kid is the stoic, unflappable hero that we all need right now.

The video, entitled, "I will never be as cool as my 2-year-old nephew in a bounce house," lasts a mere 16 seconds but, oh, the enjoyment it provides cannot be measured in something as simple as time. As the title suggests, a man filmed his toddler nephew in a bounce house (aka what you get when you want to bring a child's birthday party to the next level and make all the kids go crazy). But is this kid rolling around and screaming like all the other toddlers? No way. Bouncy House Boy stands straight and tall, his hands in his pockets, looking like a professional in a zip-front sweater and a polo shirt, his face made of freaking stone.

Behind him, some other kid falls and wiggles, a big old grin on his face. But our unflappable hero just keeps bouncing. Nothing will faze him, not even the moment at 0:09 where he almost stumbles and falls, not even the beginning of the video where he traverses backwards and then forward again like he's been jumping every day of his life. He is James Bond, master bouncer.

Next time you're feeling awkward at a party, just try sticking your hands in your pockets and emulating this little man. You're likely to instantly appear more aloof and interesting. Next time a work emergency hits, summon Bouncing Boy, and remain the calm in the eye of the storm. Next time you get the opportunity to go into a bouncy house... well, let's be real. You're probably going to flip out. Bouncy houses are amazing, and I don't understand how this boy does it.

The video, which was published to YouTube on May 14, already has more than 2 million views, and it's not a big mystery why. In a time when influential grown men are hiding among bushes and everyone just seems so angry, it's calming (and also hilarious) to see our tiny maestro of bouncing doing his thing, keeping his cool.