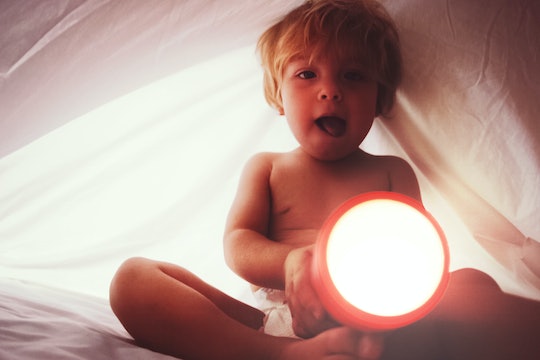 Here's Why Toddlers Suddenly Become Afraid Of The Dark, According To Experts

The things that go bump in the night scare all of us, so it's pretty reasonable to expect that the developing brain of a toddler would be more acutely worried about what happens in the dark. They have an endless capacity for creativity, and can concoct wild imaginings of what happens in the night. The fear of darkness develops over time as children begin to understand the power of the dark and what it can hide. That's why it might seem that your toddler is suddenly scared of the dark, when before, it didn't seem to bother them.

It is a part of our evolutionary biology that creates this fear of the dark, according to research from Indiana University. Before the world was a safer place, with cozy cribs and warm houses, it was a wild unknown, and the dark was a mask for the dangers that lurked in waiting. When babies are quite young, they lack the capacity to understand why they should be afraid, or what they should fear, as they rely completely on their caregivers for their safety and security. As their brain develops, and they begin to find their independence, they start to exhibit signs of fear development and anxiety surrounding the unknown — like the fear of the dark — noted research in Neuroscience and Biobehavioral Reviews.

I contacted Mayra Mendez, Ph.D., LMFT, a licensed psychotherapist and program coordinator for intellectual and developmental disabilities and mental health services at Providence Saint John's Child and Family Development Center in Santa Monica, California, and she tells Romper that if it seems like your toddler is suddenly afraid of the dark, that's actually pretty normal. She says that the fear of the dark "typically begins at approximately 24 to 36 months of age." That golden toddler period where they start to do everything from jumping on one foot, to speaking in complete sentences. The fear of the dark just slides in there with all of the other milestones.

Before that age, Mendez says that it just doesn't register to their brains because "babies are not born with the innate knowledge or experience of fear." However, they're not completely without instinct, either. She says that "they are born with reflexive reactivity that are neurodevelopmental precursors to the development of intentional protective responses." Anyone who has ever accidentally turned on the stereo or dropped a pan near a baby, only to see them jerk and scream, knows this. But that is reactive fear, not a cognizant fear based in a general anxiety over something specific, like when it appears as though your toddler is suddenly scared of the dark.

Mendez notes, "A toddler’s brain is easily receptive to suggestions imposed by media, books, and storytelling by caregivers. The young brain is not able to distinguish between fantasy and reality, but the brain is also very active and easily stimulated to imagine thoughts and images that evoke fear." Everything that they're exposed to, whether it's a lion at the zoo, or a ghost on Scooby Doo, becomes fodder for their brain, and as they realize what the dark could hide, they begin to fear the shadowed places.

It's not a lost cause, however. Mendez says that how we react to what they fear, and to everyday stressors, influences how our children respond. If we are modeling comfort and reassurance, they will pick up on that and also become calmer and less anxious. She says that "baby learns to integrate a sense of trust that helps mitigate the fear and set the baby on the path to learning and managing emotional regulation."

Sitting with your toddler in the dark, and letting them know that their space is safe and there's nothing to fear, can go a long way in easing their sudden fear of the dark.