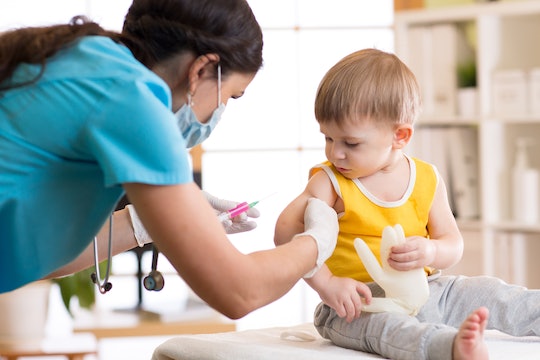 More Toddlers Are Getting Flu Shots, But Too Many Kids Are Still Unprotected

There's good news and bad news when it comes to flu vaccinations this year. According to new Centers for Disease Control and Prevention, toddlers are getting their flu shots, but the numbers start to drop off as kids get older. So, the good news is that the number of younger kids getting their flu shots has gone up in the past year, though it's still only about half the population. But the bad news? The vaccination rate for older kids is falling too short for comfort.

The goal is to get those numbers up. At the National Foundation for Infectious Diseases (NFID) press conference Thursday, Patricia A. Stinchfield, R.N., M.S., C.P.N.P., C.I.C., senior director of infection prevention and control at Children’s Minnesota said, “Our goal is to increase coverage for children of all ages as every child deserves to be protected," according to the American Academy of Pediatrics.

To drive home just how dangerous the flu can be, Stinchfield added, "the words ‘just’ and ‘flu’ should not be in the same sentence. Unless of course you’re going to say ‘I just got my flu vaccine.’” That's a cute joke, but her point is a good one. Last year, 105 kids in the United States died of flu-related illnesses, according to the CDC. And there are thousands of kids hospitalized every year.

All of those hospitalizations and deaths are entirely preventable with a flu shot. According to a recent study, the flu vaccine reduces the risk of death by 65 percent for healthy kids and 51 percent for kids with chronic illnesses. It's not just kids that need to be vaccinated, either. Adults who come into contact with children or anyone with a weakened immune system should get vaccinated so as to protect literally everyone around them.

The CDC and the AAP recommends that anyone over the age of 6 months old gets vaccinated for the flu this year. Both agencies recommend injectable flu vaccines — or the shot. They don't recommend the nasal spray vaccine, so make sure you clear that up with your doctor when you go to get your family vaccinated this year.

On Thursday, U.S. Secretary of Health and Human Services Thomas E. Price encouraged people to get vaccinated this year. “Vaccines are among the greatest health achievements of modern times, but only as useful as we as a society take advantage of them,” he said, according to The Washington Times.

In fact, the CDC even recommends that pregnant women get vaccinated for the flu. Not only does it protect the mother from getting sick, but it also reduces a baby's risk of flu by up to 50 percent and that benefit lasts up to four months after birth. (Or right until doctors recommend infants get vaccinated at 6 months old.)

Unfortunately, there are still communities of people who don't trust that vaccines, including the one for the flu, are safe for their children. Many parents report that they think their kids "don't need" the flu shot. But the data on hospitalizations due to the flu prove otherwise. Hopefully, more parents will make sure their kids, despite their age, get vaccinated this year. Because, why get the flu if you don't have to?