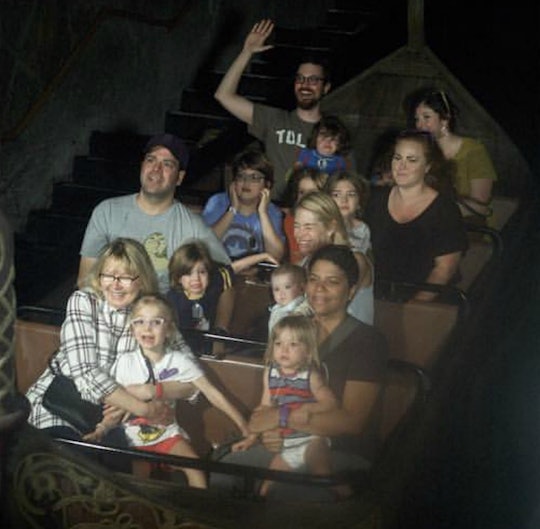 There are a lot of things to be anxious about in life. Most parents are anxious even to take their kids on an amusement park ride (and given all the awful news stories out there of late, can you blame them?). Still, sometimes it's best to just "let it go," like this dad who posted a picture of his toddler's face on the "Frozen Ever After" ride at Epcot and gave the world everything it ever needed in one joyous go. Because honestly, that toddler's face is everything.

Ryan Dunlap first posted the picture in question — which featured himself and his daughter on the ride during a Nov. 30 visit to the park — on Reddit last week. In a statement to Romper, Dunlap explained, “There’s always a little bit of trepidation on taking your child on their first ride, but this was an all ages ride and there wasn’t even a restraint on the boat — so I figured it was a lazy river sort of ride where you look at ‘Frozen’ characters."

It was not. Or at least it wasn't for the tot who was strapped in and not expecting any of the surprises that were to come. Dunlap added, “Poppy is usually very relaxed, so she was just looking around at everything. Then we came to a dark part of the ride, and I guessed there would be a photo moment, so I lifted my arm for the photo." The rest was meme-worthy history.

That's what any parent would do, right? Just prep for the moment? It should have been all in good fun, but Poppy wasn't totally ready for the big reveal on the ride, as you can see from her facial expression, which is a mix of some joy but mostly straight up fear. As her dad explained to Romper, "Usually when it’s dark, she opens her eyes really wide, and I think that — mixed with the camera flash and sudden acceleration for the small drop — created that face." Adorable, right? (I guess that depends on whether you're the kid whose face is terrified or the laughing parent who knows everything is just fine.)

Dunlap and his wife didn't notice their daughter's terror until they saw the pictures afterwards and cracked up. "We couldn’t stop laughing at the face she made," Dunlap said. The couple urged their Facebook friends to share the photo because it really is just that good and their friends told them to post the collage to Reddit, just to see what happened. So Dunlap did.

"I hoped people would find it as funny as we did. Plus, I think we can all relate to the horrible photos that come out of rides. I monitored comments pretty closely, ready to delete it if things got ugly, but those were the vast minority of comments," he said. Most people just assumed she was wearing a wig (she's not) and began Photoshopping her head on other riders in the pic. Others thought Dunlap looked like Where's Waldo, so Dunlap enjoyed some meme status, too.

Once it started making the rounds, Dunlap also uploaded a pic of his daughter not looking terrified. "She's normally a beautiful little smiley girl with a massive head of hair," Dunlap joked.

Wig or not, Poppy and her adorably hilarious reaction to a beloved amusement park ride are undoubtedly funny. Let's just hope she still has that sense of humor when she grows up and finds out she enjoyed a few minutes of notorious internet fame.