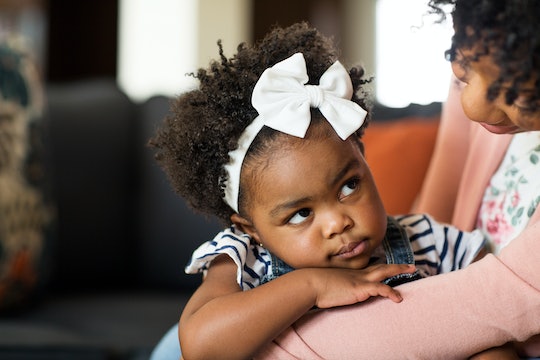 Is there a way to trick your child into asking for vegetables instead of cake? Researchers behind a study recently published in PLOS ONE certainly think so. According to the research published last month, they found that toddlers may not give you a totally honest answer when you ask them "or" questions. In fact, researchers discovered that the answers toddlers gave to questions asking them to choose between "this or that" more often than not didn't reflect their true desire or preference, but rather a response bias.

When presented with a choice between two options, toddlers verbally chose the second option presented to them 85.2 percent of the time, demonstrating what researchers call recency bias. According to researchers, the study suggests that young children tend to respond to "this or that" questions by repeating the last choice presented to them instead of reflecting on what their true preference is.

In an effort to discover if young children demonstrate response biases similarly to adults, researchers posed two sets of questions to 24 children ranging in age from 1.77 to 2.25 years old. Each question in the set asked the child to choose between two options. And while the two sets of questions were identical, the order of the options was switched and two separate characters were used.

Interestingly, children who responded nonverbally by pointing chose the second option 51.6 percent of the time, a rate researchers noted was not significantly different from chance. Children who responded verbally, however, overwhelmingly exhibited a habit known as the recency bias. They chose the second option more than 85 percent of the time no matter the character used in the question.

In an interview with Futurity, Emily Sumner, the study's lead author and a doctoral candidate in cognitive sciences at the University of California, Irvine, said the differences between verbal and nonverbal answers was likely related to children's working memory.

"When a child is pointing, they can see the options and choose their actual preference," Sumner told Futurity. "When they have no visual references and only hear 'or,' they're able to hold onto the most recently mentioned option by depending on the phonological loop."

According to Sumner, as Futurity reported, while young children understand how speech sounds they may not necessarily grasp the words full meaning, leading them to simply parrot back the last option mentioned to them.

Interestingly, adults tend to have the opposite order bias. When asked to choose between two options, adults tend to favor the first choice presented to them, a habit known as "primacy bias." This means that children's recency bias weakens as they age until it eventually becomes the primacy bias found in adults. What's more, researchers have said this weakening further suggests that children's working memory plays a significant role in their primacy bias.

While children may not exhibit a primacy bias forever — researchers found children over 3 years old didn't exhibit the bias — knowledge of the response bias may still be beneficial to parents. In carefully ordering the options presented to your toddler (cake or broccoli? TV or a nap?) you may find you've convinced your child into selecting your preferred choice more than half the time. Call it the next great parenting hack.