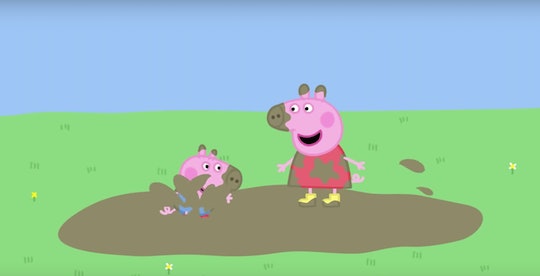 Up until the age of 20 months, my daughter was a pristine developmental specimen, untouched by screen-time. Then we flew to Australia. After 21 hours of flight time spent binge-watching Peppa Pig episodes on the iPad, my kid had adopted Peppa Pig’s plum British accent, calling me “Mummy” and finishing her sentences with Peppa’s trademark snort. Two years later, she still oinks in conversation. Call it the Peppa effect.

Danielle Cooper, of Virginia, noticed a rapid-onset Peppa inflection in her 2-year-old about a month ago. “I went to pick her up from her dad's, and she kept calling him "Daddy," she recalls over the phone to Romper. “And now just any time she refers to her dad, it's ‘Dad-day,’ no matter what.”

Cooper has noticed a talent for mimicry in her daughter, but so far Daniel Tiger and Doc McStuffins haven’t rubbed off. “She's really stuck on Peppa.”

My 3yo watches so much Peppa Pig she pronounces ‘Zebra’ and ‘tomato’ with a British accent.

Of children exposed to the show, 2-year-olds seemed most vulnerable to exclaiming, “baked beans boom!” according to an informal survey of parents by me, a parent whose hair will fall out if I hear George’s “waa-haa” cry replicated again by either of her toddlers. In fact, this anecdotal observation is reasonably on the mark: children begin to acquire their accents at about 20 months of age, according to a study by the University of Plymouth, reported on by The Telegraph.

And for many of us, it’s obviously very cute to behold.

“Reason I feel like a sh*tty parent (today): my 3yo watches so much Peppa Pig she pronounces ‘Zebra’ and ‘tomato’ with a British accent,” announced Donna Bond of Seattle, Washington, on Twitter after her daughter adopted BBC English recently.

Bond, a lawyer who admits she is a good mum, tells Romper that her 9-year-old daughter was the first to notice her toddler's accent, which came out on a number of words. On being asked what a “Zeh-bra” was, her youngest explained to her older sister, “[Zeh-bras] are a certain type of zebra,” and "tomatoes are a type of [to-may-tos] that only pigs eat."

Mimicry of Peppa is “a matter of exposure,” says Roberto Rey Agudo, the language program director of the department of Spanish and Portuguese at Dartmouth College and a public voices fellow with the OpEd Project. Reports of Peppa accents in the U.S. are prevalent “in part because Peppa Pig has been such a phenomenon with the 2 to 5-year-old crowd and it's considered cute, whereas I don't know what other shows have that kind of currency right now.”

You cannot argue with the sheer popularity of the show. Bond says that while Daniel Tiger and other characters figure in her daughter’s life, “Peppa outstrips them in her heart.” Her 3-year-old has Peppa figurines she likes to do pantomimes with, and will chide her mother “you’re not doing it right!” if she doesn’t read their Peppa books with Mummy Pig’s accent.

I think the main reason it resonates with kids is it really winds up adults.

If your child seems fluid in both American English (a plethora of regional accents, some with more cache than others, as Agudo points out) and Peppa English, that's because they aren't processing them as discrete languages, Agudo explains. For example, his daughter, who is bilingual, will ask her grandmother to read Spanish and English books, without realizing they are in different languages.

"At some level they may notice a difference in the choice of words, in the pronunciation of certain sounds, vowels, what happens to Rs after vowels," he says, but they don't identify those things with an accent, per se.

A study in The British Psychological Society likewise found that 5 and 6-year-olds were not able to distinguish between different regional accents, but could identify accents different than their own.

Romper editor Jacqueline Burt Cote first noticed her son speaking with a Peppa accent two years ago. “He pointed to a picture of a zebra in a picture book and pronounced it with an English accent,” she remembers. “I would say he still occasionally pronounces certain words that way, at 4 — it's too late now, he learned them that way during that formative phase.”

Can the Peppa accent be baked in, beyond a certain point? Theoretically. "Grownups have less neuroplasticity to adopt an accent," explains Agudo, which is why we don't have a rash of parents walking around chatting about Potato City as though they're up from Somerset. But of course our kids eventually move on from Peppa to PJ Masks to The Real Housewives Of Atlanta.

All very well, but what should we do about the snorting?

"The snort is not far from a fart noise. When I laugh I snort and it's mortifying," says Dr. Emma Byrne, author of Swearing is Good for You: The Amazing Science of Bad Language. "I think the main reason it resonates with kids is it really winds up adults."

Byrne is a "robot scientist" who studies neural networks to learn how to build better AI. Emotions are the key differentiator between humans and machines, and that annoying Peppa Pig snort is, she explains, really quite smart. Swearing, potty mouth, and other exclamations are "very useful for indicating what emotional state we are in."

Taken together, the Peppa Pig accent and oink are an ingenious way for toddlers to both communicate and get our attention.

"If you imagine being somewhere between the ages of 2 and 5, you don't have much power in this world, beyond those tantrums of going all floppy, but as soon as you find a word or a sound in this case to consistently get your parents' attention, it's an amazing thing," says Dr. Byrne by phone.

Thus, the preternaturally chipper character of Peppa, forever keeping calm and jumping in muddy puddles, is wildly appealing for little kids, and also their first great taste of comedy. "Laughing is such an amazing communicative act between humans, especially where there is a callback, that sense of belonging that comes with laughter," says Dr. Byrne, who says that laughing at your toddler's jokes is one of the most powerful things you can do.

And, you know, just run with the zeh-bras, because they, too, shall pass.

"She has this lovely little baby accent," says Bond of her 3-year-old, "and she's our last so we're not in a rush to remove it."

More Like This
17 Best Potty Training Products For Toddlers
Should You Be Giving Your Toddler Melatonin To Help Them Sleep?
My Nanny Showed Me How To Be A Mother
Infertility As A Stepmom Means Double The Alienation, But So Much Love