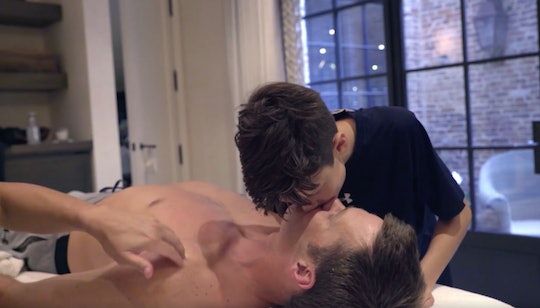 It's Super Bowl season, which means all things football are going viral, including New England Patriot quarterback Tom Brady's recent Facebook documentary series, Tom vs Time. One moment from that series, however, has made it out of the football world and into more mainstream news: in one scene, Tom Brady kisses his son on the mouth, and people are having all sorts of reactions to it. All sorts. As they always tend to do when it comes to parents kissing their kids on the mouth, really. (People have very strong feelings about this.)

In an episode of the Tom vs. Time documentary, Brady was getting a massage when his son, 11-year-old Jack, came in and asked for permission to check on his fantasy football team. "What do I get in return?" Brady asked. In response, Jack gave Brady a quick peck on the lips before starting to walk out, to which Brady said, "That was like a peck!"

So Jack circled back around and gave his dad a five-second smooch on the lips. And this was exactly where the internet started to have very strong feelings about Brady's preferred way of showing affection to his son.

Some People Were Absolutely *Not* OK With It

Others Saw It A Great Opportunity To Crack A Few Jokes

Others Thought It Was Totally Normal

From confusion to disgust to defense, the internet clearly had every reaction under the sun to Brady and Jack's extended peck. However, the gesture is something that clearly runs in Brady's family, as pictures have emerged of Brady kissing his own dad on the lips, as well. When one of those pictures went viral last year, people had plenty of opinions about that, as well.

Romper reached out to Brady's agent for comment, but did not hear back immediately. Roma Khetarpal, a parenting expert and author, told Global News last year that kissing family members on the lips is really nothing to worry about. "It’s prevalent in some cultures and not in others, that is the biggest tell-all," she said, adding:

It comes down to what your family dynamic is — just like any other cultural habit. A lot of families have cultural habits when it comes to kissing and for some, even the cheek can be offensive.

The only thing Khetarpal thinks parents should keep in mind? If a child outgrows kisses on the lips at a certain point — as some may do — parents need to respect that. Other than that, however, no experts really seem to think there's a problem with kisses on the lips in general.

However, there's one specific aspect to the Brady-Jack kiss that one clinical social worker did take issue with. Speaking to CBS News, Carolyn Meyer-Wartels said that the transaction of kiss for fantasy football time might tread some boundaries that parents might want to take into consideration.

"I don’t think affection should ever be tied in with a favor," Meyer-Wartels told CBS News. "You don’t do anything with your body because someone else is insisting that you do it in order for you to get what you want."

It's a good point, and a great way to teach kids about bodily autonomy and consent early on. It's one of the many ways you can teach them about healthy boundaries at an age-appropriate level and model it within their everyday life. (And that's a fantastic way to set them up for life as confident individuals who are aware of and respect their own — and others' — boundaries.)

As for the rest of it, though, maybe we should just let Brady and his family live. Brady hasn't commented on the public reaction yet, but everyone has their own way of doing things, and experts seem to agree that it's just cultural.