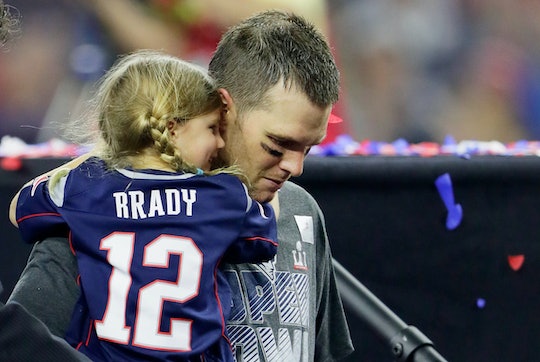 On Sunday, Feb. 3, the New England Patriots took home yet another Super Bowl win — and this year also marked quarterback Tom Brady's sixth Super Bowl win in his career. For Patriots fans, there's a lot to be excited about tonight, but no one is more excited than Tom Brady's daughter who stole the Super Bowl post-show when tons of confetti fell from the sky as her dad held her proudly in his arms while talking with reporters.

Following the Patriots' win against the Los Angeles Rams, Brady's daughter, 6-year-old Vivian Lake, simply couldn't contain her excitement that her dad had nabbed yet another Vince Lombardi trophy. Or... it was the all the confetti that fell down in the Mercedes-Benz Stadium — it's impossible to know, really.

In videos of the sweet moment shared on Twitter, Vivian — who Brady shares with his wife, supermodel Gisele Bündchen — is "absolutely losing her mind" over the post-game celebrations, according to one Twitter user. And can you blame her? Not everyone is a Patriots fan, of course, but watching your dad win such a huge game and getting to be in the middle of all that glory is pretty much a kid's dream come true.

Really, Vivian was just living her best, living in the moment, whatever you want to call it, but it was an adorable gem from Super Bowl 53, if you ask me. And lots of people on Twitter seem to agree.

Before this adorable viral moment, Brady's daughter was spotted wearing one of his jerseys in Atlanta before the Super Bowl started, as the Daily Mail reported.

Brady — who is also dad to 9-year-old Benjamin and 11-year-old John Edward Thomas Moynahan, who he shares with his ex, Bridget Moynahan — often speaks fondly of his children, and it seems like he has an especially close bond with his little girl. On Vivian's birthday, for instance, Brady penned a lovely message to his daughter. This past December, he wrote:

Happy Birthday Vivi! You have blessed us with the best 6 years of our life! You are a gift to all of us and we love you so much! ❤️❤️❤️P.s. if anyone knows where I can buy a unicorn please help me out...🦄

Bündchen also sees this heartwarming relationship. In a touching Instagram post from September 2018, she wrote: "When they say little girls own their daddies. It’s true!!"

Given everything Brady and Bündchen have shared about their adorable daughter and her love for her daddy, her reaction to his win on Sunday night is not all that surprising. It is, however, a cute treat the internet desperately needed.