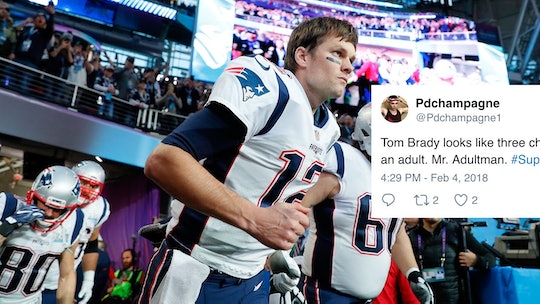 Twitter Is Cracking Up Over Tom Brady’s Super Bowl Jacket

Super Bowl LII was barely underway Sunday night when a new social media star was born. You could practically taste the anticipation in the air as the Philadelphia Eagles and the New England Patriots prepared for kickoff. And then suddenly, once again, Tom Brady's jacket was trending on Twitter. (The things viewers notice and cling onto, I'm telling ya ...) In January, fans gave the quarterback a hard time for his dramatically oversized warming jacket. Now, Tom Brady's jacket at the Super Bowl has Twitter roasting him. And honestly it's everything.

Brady was rocking a badass/chic look while donning a grey peacoat and sunglasses as he entered the stadium Sunday evening for the big game. But apparently, it was the length of the coat — and the way it made the already tall football star look ridiculously long — that made viewers do a double-take. "Tom Brady looks like three children in a jacket pretending to be an adult. Mr. Adultman," one Twitter user wrote, alongside a screen shot of the quarterback strutting his stuff.

"Tom Brady is all sexy today with his chili bowl haircut in his wife's jacket," another person tweeted.

Another person chimed in with, "The coat you wear to sneak snacks in to see #BlackPanther."

Some even thought the coat made him look like a James Bond villain, reported the New York Post. And truthfully, I'm having a difficult time disagreeing with that.

Okay, I have to admit — these tweets are epically entertaining. But to be completely honest, I wouldn't have noticed anything awry with Brady's coat if I was randomly watching a clip of him arriving for the Super Bowl. (Maybe people just feel the need to find something (anything) to make fun of, considering Brady has already won five Super Bowls so far?) Because if you missed it, people are also making fun of Brady's hair. "Why does Tom Brady have the hair cut of a 1982 fourth grader?" one Twitter user wondered. "

"Theory: Tom Brady's hair is the way it is because he legitimately doesn't own a mirror," another person tweeted. Ouch, man. That was a low blow.

Of course, Tom Brady is no stranger to criticism about what he's wearing at football games, reported SB Nation. His giant warming jacket, for example, elicits some entertaining memes and tweets each time it makes an appearance. "Brady's jacket is nearly as big as his ego," one Twitter user pointed out.

Another person tweeted, "Tfw ur trying to sneak a bottle of Jack past security."

Yet another Twitter user confessed, "I can't take tom brady seriously when he has that huge jacket on."

To be fair, it does look like there's enough room in there for two or three decent-sized football players to have a party. But still. When it's cold outside and you're a star quarterback trying to keep those muscles warm, this giant garment looks like it gets the job done.

LOL. Guys, I literally cannot stop laughing at the hot air balloon Tom Brady. Online guilty pleasure mocking aside, why do people enjoy dissing this guy so much? If the five Super Bowl rings (and possibly six after tonight) aren't enough reason to resent him, what other beef do the haters have against Brady? Maybe it has to do with his notorious football-deflating antics back in 2015, after which Brady was suspended for five games for his blatant cheating, reported NFL.com. Or perhaps it's the lingering memory of his controversial support for and endorsement of Donald Trump during the 2016 election, according to CNN. It's hard to say, for sure.

Even if you aren't familiar with Tom Brady's history, you have to admit: The Twitter commentary on his wardrobe choices is entertaining AF. With that said, if he manages to lead the Patriots to his sixth Super Bowl win, perhaps Brady will have the last laugh after all.