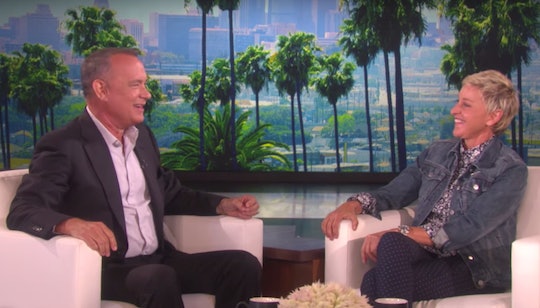 Could Toy Story 4 be a Finding Dory crossover? A fantastically fun segment on Friday's episode of The Ellen DeGeneres Show could definitely serve as proof of concept. With the audiences' eyes closed, Tom Hanks and Ellen DeGeneres brought their Pixar characters to life, to the total joy of kids and parents everywhere.

The improvised interaction between two of Pixar's most famous characters stemmed from a question Hanks asked DeGeneres, according to E! News: "Do you make [little kids] close their eyes and then speak to them like Dory?" Hanks explained that when parents recognize him in public, they often introduce him to confused kids as Woody from Toy Story. In response, Hanks asks tots to close their eyes before saying something as the iconic cowboy. When little ones hear Woody's voice, they have instant recognition.

Hanks then asked DeGeneres to join him in a "Pixar-Off," prompting members of the live audience to close their eyes before he and the talk show host voice-acted the meeting of Dory and Woody. The dazzling interaction drew huge applause from the audience and earned a massive ovation from fans on the internet. While kids definitely got a kick out of the conversation, slightly older Pixar devotees confessed that seeing Hanks as Woody and DeGeneres as Dory gave them all the feels:

Finding Dory premiered in June 2016; ET reported that DeGeneres pushed for Pixar to do the sequel to Finding Nemo. The movie followed Dory, the blue tang with short-term memory loss, as she went on an adventure to find her parents at the Marine Life Institute. The 13-year wait for the animated film to make it to the big screen left DeGeneres concerned for her voice. As she told ET, "I was worried my voice would start changing, and I couldn't be Dory anymore." It's unclear whether there will be another film starring Dory, Marlin, and Nemo, but DeGeneres indicated to ET that she's open to it: "... I'm hoping my voice doesn't change too much more if we do another sequel to this!"

Tom Hanks evidences a voice actor's potential longevity: Toy Story 4 is in pre-production, according to IMDB. The original Toy Story premiered in 1995, when Hanks was 39 years old. He reprised his role as Woody in the 1999 movie Toy Story 2, then took on the part one more time for Toy Story 3 in 2010. The third installment appeared to be the last, but audiences couldn't get enough of the franchise; Toy Story 4 is slated for release in 2018.

While fans wait for a new Toy Story and cross their fingers for Dory's return, they can delight in Hanks and DeGeneres' impromptu performance: