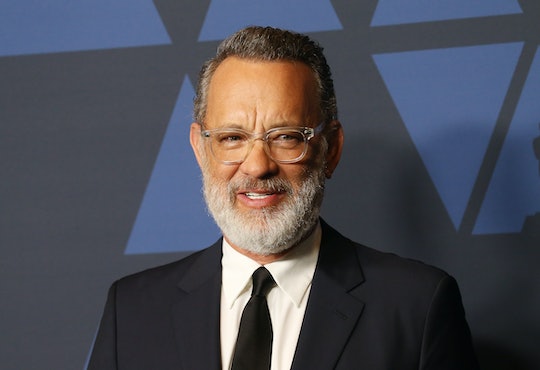 Just five days before the premiere of A Beautiful Day in the Neighborhood, Tom Hanks learned Fred Rogers is his distant cousin. And although the interesting link was a surprise to the actor who plays the beloved Mr. Rogers in the movie, I think this news makes perfect sense.

At the New York City red carpet screening of the movie Sunday night, Access Hollywood dropped the DNA bombshell on Hanks and his actor wife, Rita Wilson, during an eye-opening interview. Using research compiled by Ancestry.com, the reporter revealed the late Rogers is Hanks' sixth cousin, with the two "sharing the same 5x great-grandfather, Johannes Mefford, who immigrated from Germany to America in the 18th century." It's a cliché, but wow, what a small world.

Wilson expressed shock at the news, saying, “no impossible, no you’re pulling our leg,” while a clearly moved Hanks added, “it all just comes together you see."

Ancestry also shared a family tree that illustrates the connection, giving a detailed glimpse into the pair's long history.

This is an incredible connection in and of itself, but especially when you realize the odds of a famous actor unknowingly playing his distant relative in a biopic. If only Mefford knew one day down the line his great-great-great-great-great grandsons would pay tribute to one another in such a special way. Talk about the chances, right?

Once the rare odds of this relation sinks in, however, it begins to make perfect sense. When Rogers was alive, for instance, he was a "big fan" of Hanks and his work, as his wife, Joanne Rogers, revealed to People.

As for Hanks, he has great admiration for Rogers' legacy, recalling how a 1981 episode of Mister Rogers' Neighborhood made him “bawl his eyes out" thanks to the icon's overwhelming kindness.

And lastly, Joanne thinks Hanks "looks adorable as Fred.” This is a popular assessment, as many fans marveled at how similar the actor appeared to Rogers in the film's trailer.

So although this is a surprising DNA twist, when you get down to Hanks and Rogers' shared commonalities, it all comes together in a cosmic way. Way to go, universe.