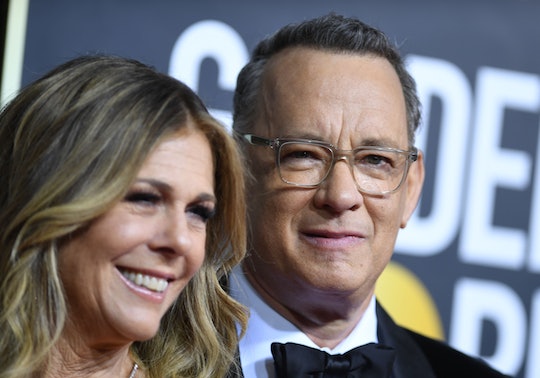 The best thing about Ricky Gervais hosting an awards show is watching the celebs in the audience trying to figure out the appropriate response to his jokes. This year, Tom Hanks' reaction to Ricky Gervais' Golden Globes monologue pretty much sums up the mood in the room... and everybody's living rooms, too.

Just like every other time Gervais has hosted the Golden Globes, his monologue was full of jokes skewering all the people being honored at the event. If you're a fan, you know that's kind of the point: Without Gervais there to take the glitterati down a notch, they might start taking the praise a touch too seriously, and the show would be a real snore. But even for those who might secretly agree that Gervais and his biting humor serve a purpose, there's the issue of how to react to his more potentially offensive cracks: Laugh out loud and risk looking insensitive (or worse) for the cameras; sit stone-faced and look like an overly sensitive stick-in-the-mud.

Leave it to consummate pro Tom Hanks to handle the situation perfectly. When Gervais let loose with a series of slams including a takedown of celebs who get political in their speeches but support sweatshops and know less than Greta Thunberg ("hypocrites," per Gervais), Hanks didn't laugh, exactly. He didn't sit stone-faced, either. He made all the faces instead.

Okay! He said that. Welp. Hmm.

Thank you, as ever, Tom Hanks, for expressing the emotions of millions.