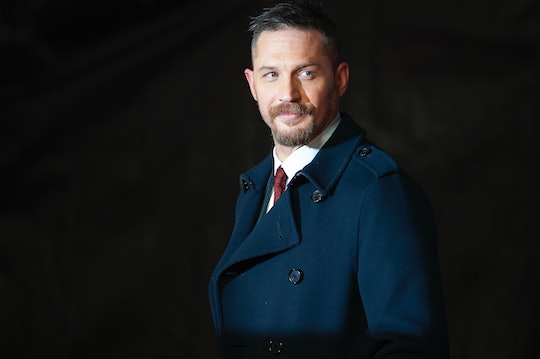 Now Tom Hardy Can Read You A Bedtime Story

Get ready to have some very strong opinions about Tom Hardy. The British actor recently appeared on the U.K. children's network CBeebies, and I honestly have newfound respect for him as an actor (to be fair, I previously knew him only as Bane, the obnoxiously-voiced villain from The Dark Knight Rises). Clear five minutes from your schedule, and don't even bother hiding from the little ones, because Tom Hardy reading a bedtime story is something parents and kids alike are sure to appreciate.

Hardy was joined by his very sleepy friend Woody, a lab mix who enjoys chasing pigeons and participating in red carpet interviews, according to BuzzFeed, which chronicled Woody's attendance at the premiere of the film Legend in 2015 (do click through for the adorable pics). Hardy reportedly chose his own book, according to Mental Floss: You Must Bring a Hat, written by Simon Philip and illustrated by Kate Hindley. It's a great book that's really brought to life by Hardy, who tells the story as a first-person anecdote while doing distinct voices for all the various characters. I'm telling you, it even makes up for Bane's voice. Seriously, what was that voice about? No matter, all is forgiven after watching this video.

Woody isn't the first dog who's tagged along with Hardy in a decidedly human-oriented setting. Vanity Fair dug up a 2007 interview with Dogs Today (yeah, he's really into dogs) in which Hardy describes taking his late dog, Max, to drama school with him. "Max was my support unit, it’s like I had a focus; I had an identity and higher self-esteem because something relied on me and loved me constantly. Then I felt important." He also prefers dogs to people, works to rehome rescues, and has very, very strong feelings on poodle haircuts. The entire article is worth a read, even if you don't care one whit about dogs, simply because anyone who's so passionate about something is worth listening to.

In addition to dogs, Hardy also likes small humans. It's obvious from the video that he has experience reading bedtime stories. He has an 8-year-old son, Louis, from his previous relationship with Rachel Speed, and he and wife Charlotte Riley welcomed a baby in October 2015 (the child's name and gender are unknown). According to Hello magazine, Hardy credits Louis, in part, as his inspiration to battle his drug and alcohol addiction. The actor has been sober since 2003, and he's currently my favorite dad of 2017.

More Like This
'Women Talking' Is A Powerful New Movie Based On A Book
Marie Kondo Gives Up Tidying Post-Kids, Sparking Joy For Moms Everywhere
Sally Field Is The Ultimate Cool Mom Who Once Tried To Set Her Son Up With An Olympian
10 Great Podcasts That Will Keep Your Kids Entertained On Your Next Family Road Trip
What Parents Are Talking About — Delivered Straight To Your Inbox