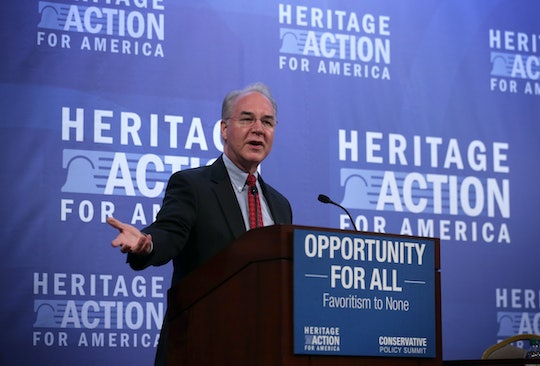 Those who have been frustrated by President-elect Donald Trump's continued appointment of unqualified people to his Cabinet may have breathed a sigh of relief upon hearing that his new pick for secretary of Health and Human Services is a former orthopedic surgeon. Well, suck that sigh back in and prepare to scream in terror, because Georgia Rep. Tom Price's views on women's health are regressive, backwards, and downright scary. Remember how interest in IUDs spiked after Trump was elected? They were all right. Drop your phone right now and run to your doctor; I'll wait.

Price is a very vocal opponent of the Affordable Care Act, also known as Obamacare, and in fact has been trying to repeal it for years. He takes specific issue with the rule that requires employers and insurers to offer birth control at no cost, and when asked by ThinkProgress in 2012 what low-income women would do without access to free birth control, he said, "Bring me one woman who has been left behind. Bring me one. There’s not one." In fact, 34 percent of women voters have had trouble affording birth control at some point, and when you look at just young women 18 to 34, the number jumps to 55 percent, according to a Hart Research Associates survey commissioned by Planned Parenthood. Price's claim is simply outrageous.

Price's views have earned him a zero-rating with both Planned Parenthood and NARAL, and his voting record doesn't read much better. He voted against funding to combat AIDS, malaria, and tuberculosis, he opposes the State Children's Health Insurance Program, he wants to defund Planned Parenthood (of course), and he voted against giving mental health full equity with physical health. But wait, it gets worse, if you can imagine that. He co-sponsored the medically unsound Pain-Capable Unborn Child Protection Act, and also the truly disturbing Right to Life Act, which aimed to give equal protection to "each born and preborn human person," which was defined in the bill as "each and every member of the species homo sapiens at all stages of life, including, but not limited to, the moment of fertilization."

To cap it all off, Price is also a member of the Association of American Physicians and Surgeons, a group that preaches that Medicare is evil (I'm not being facetious; they literally use the word "evil"), that death panels and baby parts sales are real things, that vaccines cause autism and contain said baby parts (they do not), and holds a variety of deeply disturbing views on sexuality and gender that I'm frankly not even comfortable typing. Click through to learn all about them, if you're not currently eating. This whole "moving to Canada" thing is sounding less silly every day.