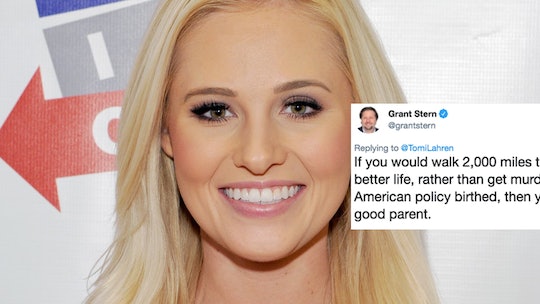 It's no secret the U.S.-Mexico border crisis is a hot-button topic for many Americans. What many fail to recognize, though, is this: The majority of immigrants are traveling thousands of miles to flee persecution and violence, all in hopes of a better life for their families. And with all of this mind, it's no wonder why Tomi Lahren's comment about immigrant families escaping violence has plenty of Twitter users livid.

If you're not already familiar with Lahren, she's a 26-year-old conservative political commentator and Fox News host. But mostly, she's famous for sharing controversial takes to social media, a trait she put on full display when she took to Twitter on Tuesday during night one of the second round of the Democratic debates.

As expected, Lahren spent the evening live-tweeting her reactions to the presidential candidates on stage that night, not holding back when it came to her opinions. But one tweet in particular about immigration was especially divisive, even coming from her. "If you traipse your kid 2,000 miles in dangerous conditions you're not only a criminal, you're a sh*tty parent," she declared. Wow.

As you can imagine, Twitter had some feelings about Lahren's comment regarding parents fleeing persecution and violence in their own countries. Some were straight-up livid, with one person writing, "If you would do anything for your child to have a chance to survive, not only are you a compassionate parent, but brave. F*ck you. You don’t have kids so you have no idea what it’s like to do anything for them to survive and you have no idea of the conditions they are leaving."

Another angry Twitter user wrote, "Lady shut your white privileged ignorant *ss up. The only struggle you face is picking if you wanna watch The Bachelor or The Office every night."

Meanwhile, other Twitter users tried reasoning with Lahren. One person commented, "I not only respect but am in awe by how much these people love their children in order to traipse them across shitty conditions to lead them to safety! How terrible must the conditions be in their home countries? We should wrap our arms around them and ask, how can we help?"

Another Twitter user shared a video story of one immigrant who was separated from her son at the border. They wrote, "Hi Tomi. Meet Nilda. Born in Honduras. Forced to escape sex, domestic, & gang violence w/ her 2 y/o. 17 hrs on side of a train. Faced violence in Mexico. Thought U.S. would protect her. Instead border agents stole her son & detained her. She’s the truth."

Still others pointed out that most Americans are immigrants whose families were seeking a better life, too. One Twitter user shared, "In 1908 my great grandparents took their young children across the Atlantic in the steerage of an overcrowded ocean liner with no cash and their valuables sewn into their clothes, to escape the pogroms in the Ukraine, after the Cossacks burned their tailor shop to the ground."

And I suppose Lahren thinks Mary and Joseph were apparently sh*tty parents, too. Another person commented, "Jesus' family fled to Egypt when he was a newborn to avoid genocide...... but then, only Christians would know that."

Even actor Chris Evans chimed in, stating: "Wow. The complete lack of sympathy, respect, and general awareness is astonishing. Also, I would carry my kid through fire if it meant escaping hell."

By the way, the huge influx of immigrants seeking asylum in the U.S. didn't come here on a whim. These families are desperate to escape countries in which gang violence and extreme poverty are rampant. So, they make the long and dangerous journey through Mexico and toward the U.S., hoping something better awaits them on the other side. But thanks to the Trump administration's policies, these children are often taken from them and detained for months on end. You know, although President Donald Trump officially ended the practice of separating children and parents at the border. Because as it turns out, nearly 1,000 additional children have experienced just that.

So, yeah. Whichever way you spin it, Tomi Lahren's comment about immigrant parents is not only cruel, but it completely ignores the reality these families face.