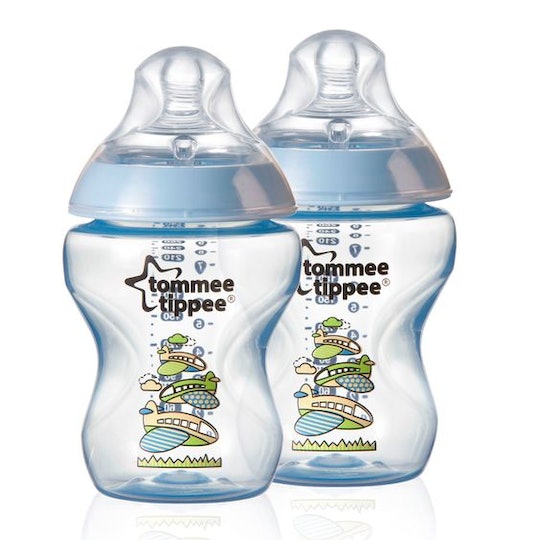 Tommee Tippee Is Making 500 Discontinued Sippy Cups For A Boy With Autism, & It's The Best

Most parents can relate to the unique kind of misery that exists when your child grows attached to a product that you can no longer find in stores, but for one British dad, the loss of his son's favorite sippy cup was particularly heartbreaking. Marc Carter's 14-year-old son Ben has severe autism, and has been drinking exclusively from a specific type of Tommee Tippee sippy cup since he was 2 years old. Ben is so attached to the now-discontinued cup that he refuses to drink from anything else, even to the point of being hospitalized for dehydration. Carter issued a plea on Twitter to anyone who might be willing to sell their cups to him, but now, Tommee Tippee is making 500 discontinued sippy cups for Ben after hearing about his story, so that he will hopefully never again have to worry about running out.

According to CNN, Carter explained in his original tweet that Ben is "non-verbal and has very limited understanding," and wrote that his son "hasn't drunk at school since the age of 5, [and] doesn't drink outside of the house so we can't go anywhere." Although Carter has tried to give Ben a variety of similar sippy cups in hopes they'd work as an alternative, he wrote that the more modern cups "are all new and fancy" and that "Ben throws them at us." He added that the one cup that Ben still had likely wouldn't last much longer, and wrote, "in all honestly we are really worried what will happen if it falls apart completely."

Carter's post went viral, and he received lots of offers from other parents to send similar cups, though unfortunately, they weren't the special blue one that Ben needed. According to POPSUGAR, some Twitter users were in fact able to locate the specific cup, and in an effort to help out, Tommee Tippee offered to cover any shipping costs involved to get the used cups to Ben. The company also managed to locate one of the original cups in storage, but given that Ben may very well need the cups for the rest of his life, even the additional cups weren't likely to be enough.

But just as things were beginning to look a bit grim for Ben, Tommee Tippee got in touch with the family with some fantastic news. According to BBC News, after conducting a worldwide search for the cup in its various factories, Tommee Tippee was able to locate the original mould for the blue cup, and offered to make 500 cups specifically for Ben, free of charge. Carter told BBC News that, as far as he's concerned, he couldn't have asked for anything better:

I would not be happier if I won the lottery. Just knowing he has got these cups gives us peace of mind.

In a statement on its website, Tommee Tippee confirmed that the cups would soon be in production, and that Ben would no longer have to worry about running out of cups:

Our factory team discovered that the tools to make the original cups were still stored away and, crucially, they were in a usable condition. ... We are delighted to confirm that we are able to start production on a run of the original cup, ensuring that Ben has a lifetime supply and that his family won't ever have to worry about finding another cup.

Both Carter and Tommee Tippee have continued to share tweets and updates in response to the #CupForBen campaign, and the support shown by strangers around the world has been huge. In fact, Ben's story has resonated with so many people that Carter has begun crowdfunding for a documentary designed to raise awareness about all of the other children just like Ben, who struggle significantly with aspects of daily life in uniquely challenging ways. In a video posted to his YouTube channel, Carter explained that the goal now is to,

move the conversation on from just Ben and the cup and the story ... to talk about autism. So many people out there have got their own 'Bens' and their own 'little blue cup,' so I want to do more with that.

As heartwarming and uplifting a story as this is — because, honestly, how great is it to know that Ben will be getting 500 brand new cups? — it's clear that, at this point, Ben's story has taken on a life of its own, and can now stand to serve a much greater purpose. After all, what Ben's family has dealt with is something that so many other families around the world can relate to, and yet, unless you've been there yourself, it can be hard to truly understand just how important something like a sippy cup could really be. Although this may have started out as one dad's plea to find an extra discontinued sippy cup, it seems like it's now become so much more.