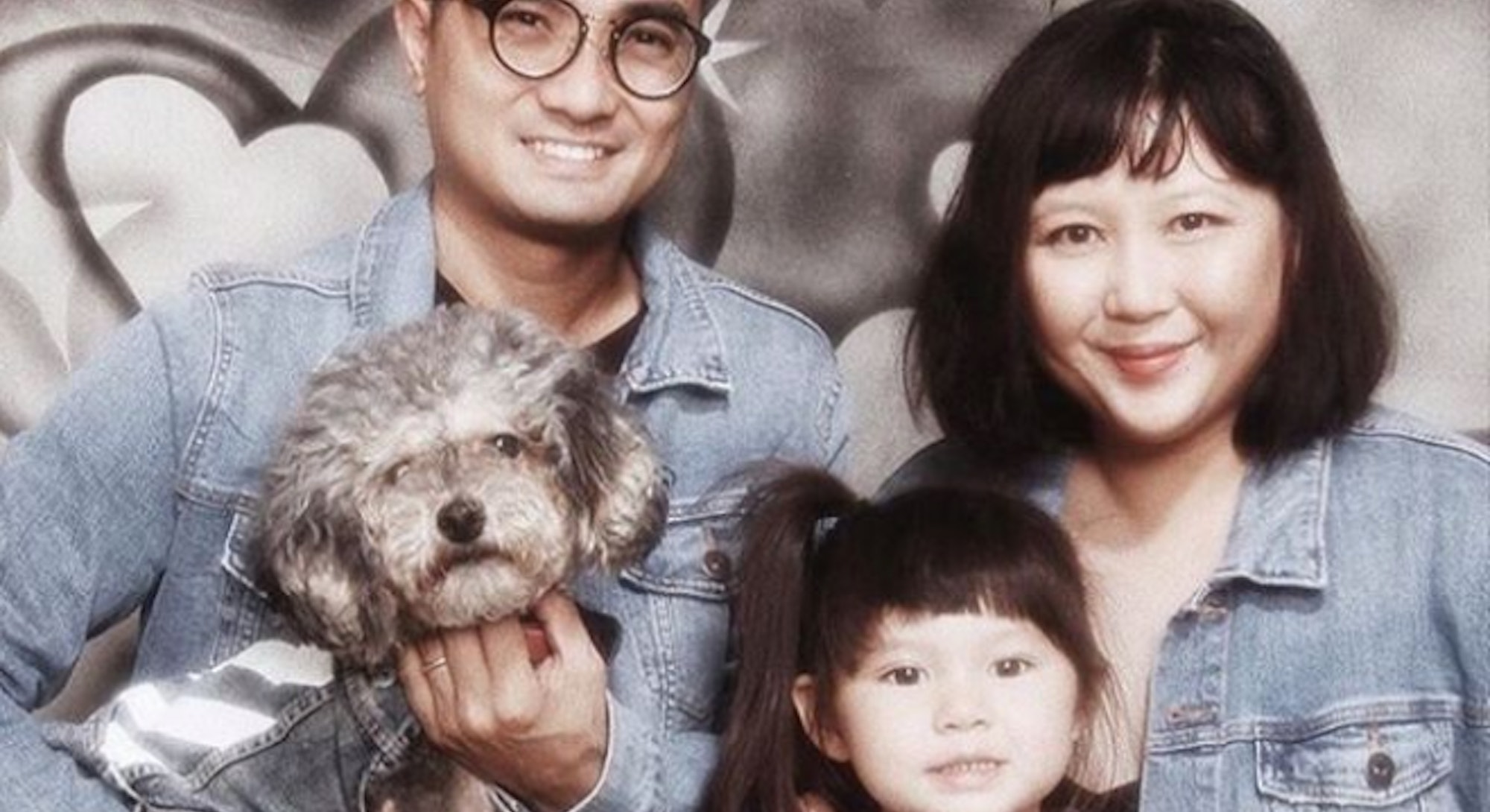 At Tom’s, The Family That Poses Together, Stays Together

Tom's camera finds a family in formation. He might rearrange some limbs, turn a face this way or that in front of the hand-painted backdrops, and then it's a matter of timing it right. He processes and develops them into several iterations: a large print, some smaller, more side-table-ish prints, a sheet of wallet-sized prints; a family in posterity. Or, more recently, the country music singer Kasey Musgraves... about which more in a moment.

Tom Tuong, the 60-year-old owner and sole permanent employee of Tom's One Hour Photo in Los Angeles' Koreatown, has been taking photographs for 40 years. After moving from Vietnam in 1979, he started off doing weddings, and opened his one-hour development shop and studio in 1991. His philosophy in doing a family portrait is to "make it really seem like you're together. Like you are a family," says his son Nick Tuong. "He understands, like, 'Yeah dude, these are the people who brought you into the world, let's make it a nice picture of celebration.'"

This is a thing people have long loved to do — think of those rigid tintype families from the latter nineteenth century on back to Renaissance portraiture of regal families and their shiny horses. But portraiture in the 1990s was somehow more camp, more fantastical than at any other time in the past (think laser beams shooting out from behind tweens, moms resting their hands gently on foam Corinthian columns).

Chances are, though, that you haven't sat for studio photography since your own childhood. There have been family photos, yes, tossed off at weddings, and in careless moments throughout the day, but a family arranged on stools in front of a bolt of fluffy clouds on a bright blue sky, the vignette softening the corners — those we don't do anymore. And it's worth asking what we've lost in the process.

One Hour Photo was completely obsolete at that point. And after that, we saw just a huge silence in business.

"Early '90s, people still did portraits. We would get regular amount of customers come in, take their portraits, develop their film. It was a very stable business," Nick tells Romper. He remembers his dad constantly busy shooting and developing. "The dude that sells us chemicals, he watched me grow up."

Then came smartphones and photo-editing apps in the 2000s.

"One Hour Photo was completely obsolete at that point. And after that, we saw just a huge silence in business."

There were 3,066 one-hour photo stores in the U.S. in 1998, according to census data analyzed by Bloomberg; that number fell to 190 by 2013. Kodak went bankrupt in 2012 after failing to take advantage of early digital models and continue developing its online sharing platform, as Harvard Business Review surmised in 2015, and hit small businesses harder than big retailers like CVS offering photo development services.

The lull had a profound impact on Nick's dad Tom; aged him. Nick's mom Lisa Le worked doing manicures at a salon to help pay the bills ("Typical stereotype that you need," notes Nick), and the family pitched in to "keep the lightbulbs running" as Nick and his sister Tisha grew up.

Then, in August, singer Kacey Musgraves came into Tom's One Hour Photo, and, in a gesture of goodwill, started an Instagram account of the same name. Tom's blew up. The Los Angeles Times' Suhauna Hussain and Rachel Schnalzer reported the back story. Rolling Stone came knocking. Busy Phillips' daughter Birdie took a snap with her bestie. Maude Apatow was spotted leaving Tom's and hopping into a Range Rover. Tom is now booked solid a month in advance.

"This is the happiest I've seen my old man in a decade," says Nick. "He's himself again. It's like he's 30 again, right? He gets to live his passion."

In the Tom's One Hour Photo Lab Instagram feed, a family clad in head-to-toe denim stands apart, seemingly transported from 1994 along with the spray-painted backdrop. April Joy Castillo, the mom in the shot, grew up in Los Angeles, and is in possession of a series of yearbook photos she and her friends took back in the day, redolent in their best, most Brenda/Brandon Walsh jeans.

Castillo booked a portrait shoot for her 2-year-old daughter at Tom's in a fit of nostalgia. While they were there, she explains to Romper, they felt the impetus to return for a family sitting, "and have our dog in the photo."

"We don't have really any photos of the four of us."

Growing up, she never had those kinds of photos taken with her family either. So the four of them — April, her husband Carlo, daughter Fox, and pupper Orson Welles — went back two weeks later.

"Tom is amazing. He is very kind. It's just, you can tell that he enjoys what he does," she says.

She may look back like 15 years from now and she'll be like, What were my parents thinking, putting us in matching denim jackets?

Castillo is one of many families who have been inspired to make the pilgrimage to Tom's.

"I'm a '90s kid and those 'starshots pictures' were a thing you did," recalls Andrea Ornelas, who was tagged by a friend on Musgraves' post about Tom's and subsequently booked a session. "I took my little baby with me so he can get that experience too!"

Maura Velasco also remembers taking portraits with her friends in middle school. "You'd give them to your friends and write cute little message on the back," she tells Romper by direct message. Nostalgia likewise inspired her to take her daughter and goddaughter to sit for portraits with Tom... where they posed like Kiss.

Castillo plans on coming back for more family portraits at Tom's, and loves the idea of "collecting memories" for her daughter to treasure.

"I mean she may look back like 15 years from now and she'll be like, What were my parents thinking, putting us in matching denim jackets?"

In 1999 — the peak of film photography — consumers around the world took 80 million photos, according to Stephanie Lavoie's research in a piece for One Zero. These were what some have deemed "permanent photos," as opposed to the "temporary" photos taken now for Snapchat and Instagram stories, or buried in an endless digital camera roll, which we now take in the billions every year.

"In their scarcity, photographs can age like wine, with grace and importance," wrote Nathan Jurgensen in The New Republic in 2013, before writing a book on the subject. "In their abundance, photos can sometimes curdle, spoil, and rot."

This reporter has written previously about the need to immortalize her family in a portrait under threat of a time-limited existence, and at the same time the need for someone — a celestial hand with a knack for flattering chin angles — to help shape what the camera sees. Our children grow too fast, and a family photo is proof, protection against the erosion of memories over time. The one-hour photo lasts forever.

And Tom seemingly understands that better than many.

'It's reunited the family,' says Nick. 'And not just the immediate family.'

The recent boom in business after decades of Tom working alone in his small studio at the back of the shop under the power of a single fan has also changed the greater family.

"It's reunited the family," says Nick. "And not just the immediate family — me, mom, dad, [my] sister. It's cousins, too. Cousins and uncles. They hear our story and it's like, 'Oh wow, look at that.'"

Even though Tom's children, nieces and nephews are grown and have careers of their own, they have come by to help handle the demand. And that has been even better than getting to perform his art every day, Monday through Sunday.

"My dad loves his family," says Nick, "I think more than photography."

His work in that little studio, which gets hotter the more people are crammed in, has brought back an intimacy lost in the depersonalized age of digital — just a family holding together in front of an acrylic rainbow, a bird flying over their heads as the wind buffets their faces.

Plus, says Castillo, "We have our Christmas card set now."