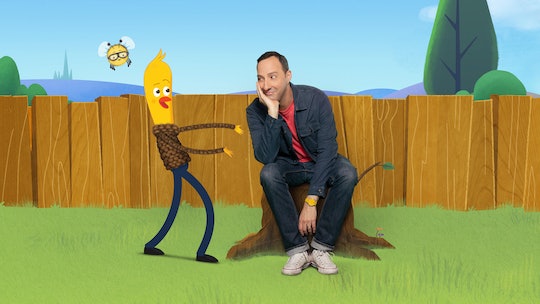 Tony Hale’s 13-year-old daughter is embarrassed by everything he does. “I could say the sky is blue and she'd be like, ‘I don't know,’” he says in a phone interview with Romper. “She's precious and I adore her more than anything, but she's definitely very embarrassed by me.”

Hot on the heels of his turn as Forky, a lopsided Toy Story character created from trash, Hale is promoting his new children’s show on Netflix, Archibald’s Next Big Thing, based on the children’s book he wrote years ago. Hale voices the titular chicken, and also executive-produced the show, which features a character named for his daughter, Loy. Hale says the two of them worked on her design as a “neat little daddy-daughter project.” Loy (the human) decided Loy (the cartoon) should have argyle socks and pigtails, “and I’m thinking, like, a pink shirt.” But while both his daughter and the cartoon Loy are similar in some ways — “Loy likes a plan, and my daughter loves a plan” — his daughter’s ability to fully appreciate a moment without agonizing over the future is totally Archibald.

Hale is best known for playing obsequious, anxious, overgrown characters who cling to the skirts of their proverbial mothers — Buster Bluth on Arrested Development and Gary Walsh on Veep. Archibald, the skinny yellow hero of Archibald’s Next Big Thing, is not like that. Hale wanted Archibald to embody a child’s carefree joy in life. Archibald is a bit like his daughter in that way.

“When she was little, whatever game she was in or whatever, whoever she was playing with was like, the best moment of her life. She continues to be like that, even at 13.” He continues, “I just love that living, that fullness, you know?”

The cool thing about being a parent is it's neat being able to, in a loving way, to tell them what you wish somebody had told you.

In interviews from when Archibald’s Next Big Thing was first published, Hale has said the story was inspired by his own tendency to never be content with his life, as he was always looking for “the next big thing.” Even after landing Arrested Development, his first major acting role, Hale worried about what was to come. In the book, Archibald is also always looking for the next big thing, until he meets a friendly bee named “Bea” who encourages him to stop and live in the moment, to just “be.” Get it?

On Archibald’s Next Big Thing, there are ways in which Loy’s influence leaves its mark. At 13, Loy is a bit older than Archibald’s target age range, but Hale says he can still take advantage of her youthful imagination. A kid’s mind, he points out, has no “edit button” in the way an adult’s does, and an animated series is no place for logic. While a grown-up would automatically think, “I’m not sure if having all the characters live in giant eggs makes sense,” a kid has no such qualms. So every now and then, Hale will ask Loy if she has any ideas for Archibald, and she’ll throw up something completely off the wall (what if, then, there are aliens that come down?), which he will then take to the writers to workshop.

Archibald’s essential message is to appreciate life as it’s actually happening, a value clearly important to Hale, and a bit of wisdom he’s excited to pass on to Loy. “The cool thing about being a parent is it's neat being able to, in a loving way, to tell them what you wish somebody had told you,” he says.

Then you also think, she's probably got about five more years with us and then she's off to college and you're like, ‘What? She was just that age, she's just a baby.’ That stuff just blows my mind.

While society will convince you your value lies in your job, your accomplishments, or hitting certain benchmarks, he tells Loy, “No. Your value, your personal value, is going to stay the exact same before and after that. The exact same,” Hale says. “It's things like that I love just chatting with her about.”

But it also seems Loy is already more ~unbothered~ than Hale says he was at her age. “The challenge is for me not to put my own seventh-grade nightmare into her, or eighth-grade chaos into her, because she's doing fine.”

Hale is also trying to stay away from “snowplow parenting,” wherein a parent painstakingly removes all obstacles from their child’s way. This becomes a problem when children never experience obstacles and thus never learn to overcome them, which is an important part of growing into functioning adults. Hale, a completely relatable parent, frets about unintentionally creating issues for his child and also worries that she is not facing enough issues to grow as a human.

“Then you also think, she's probably got about five more years with us and then she's off to college and you're like, ‘What? She was just that age, she's just a baby.’ That stuff just blows my mind.”

But for now, the trick is just to enjoy the middle-school era.

Archibald's Next Big Thing is now streaming on Netflix.