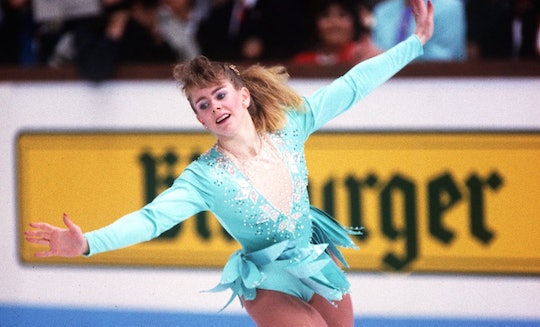 YFIP — it’s internet shorthand for “Your fav is problematic,” and it couldn’t be more perfect for how I feel about Tonya Harding. She was the first American female figure skater to land a triple-axel in competition — a hero! She pled guilty to “hindering the prosecution” of the attack on rival Nancy Kerrigan, which took place six weeks out from the Lillehammer Olympics in 1994 — a villain! Harding’s ex-husband was convicted of “racketeering” in relation to the plot. Harding knew, she has told the New York Times, “that this would be with me for the rest of my life.”

Harding is the perfect conflicting figure in a moment when feminism is allowing itself to complicate our understanding of these distant, formative moments. Her biggest achievements all took place in the shadow of the attack on Kerrigan.

To better understand why she continues to hold a special place in my life — and in the lives of other girls reared on her feats — you need to understand that sports were an integral part of how I came to feminism. As a tomboy who was not dainty, I was hungry for women athletes to look up to who were praised for their strength not their beauty or grace. Harding’s grit and toughness drew me to her.

I was in high school when Harding became the first U.S. woman to land a triple axel in competition in 1991. Figure skating had always been my favorite part of the Winter Olympics. The strength needed to do jumps always astounded me, yet it seemed to me that the majesty of the dance was what won titles. I have a similar love-hate relationship with gymnastics. I loathe how the men do not have to fit their acrobatics to a musical piece, but women need to exhibit dance skills. I watch to see who can twist their bodies faster and higher than others. I am in love with their power. Landing on a mat without bouncing or on a thin blade without falling requires incredible strength, and the ability to conceal it. As Joan Ryan, author of Pretty Girls In Little Boxes, recently told Slate of the culture surrounding female gymnastics:

“What’s sad about it is that they are among the greatest athletes you are ever going to see on Earth, and I don’t think they get as much respect for what it takes to do what they do because it’s all so prettied up.”

I didn’t care about the costumes back then. Like most Olympic spectators I rarely tuned in or followed athletes during off years. Then Harding landed that triple axel.

The world changed. It was the most amazing thing I had seen an athlete do. I started to actively look to figure skating to see what Harding would do next. I was extra eager for the next Olympics. I was and still am an Olympic junkie. If they had been made, I would have bought a “Team Tonya” tee and worn it proudly. I don’t recall much of the 1992 winter Olympics beyond feeling Harding and fellow triple-axeler, Surya Bonaly were robbed of medals. I was straight-up biased in my cheering. I wanted to see the powerful athletes, not to mention the Black woman, be recognized for their skills. Don’t get me wrong, I adored Kristi Yamaguchi, but Harding was my girl.

In 1992, the landscape of what was cool, including feminist cool, was skewed towards toughness.

At the time, the ongoing debate over whether artistry or athleticism was more important had flared up — the judges in this case favoring the former. In December of last year, former champion Dick Button told The Mercury News that he believes the new judging system prioritizes athletic achievement, to the detriment of the sport:

“There is no time for a Michelle Kwan to do her huge spiral. There is no time to do anything. Have you seen skaters flailing their arms all over the place? I have and I don’t like to see it. It doesn’t add up to anything theatrical or reflects the music. I have zero interest in the fact that somebody wins with 283.4 points. That does not intrigue me.”

But Button is taking for granted the freedom for skaters to display and be rewarded for strength. On the rink, especially, what Harding was doing back in the late ‘80s and early ‘90s was revolutionary — it mirrored the counterculture.

You need to remember that in 1992, the landscape of what was cool, including feminist cool, was skewed towards toughness. We were still reeling from the Anita Hill fiasco and feminists were pissed as hell. Later that year would be dubbed the Year of the Woman for having four women elected to the U.S. Senate.

Currently, with #MeToo, women’s anger is being hailed and, well, we were pretty angry back then too. As a tomboy who was told by the world that embracing femininity did not go well with toughness, I actively rejected softness or wore it with irony. My fashion melded the toughness of hip hop and riot grrrl, at least what I could see from my suburban Chicago home, in wearing flower dresses with combat boots one day, and ripped jeans and a see-through shirt with a black bra the next. Tough sexiness was my aim. Clearly Harding was cool and Kerrigan was not. And I even had feminist reasoning to why I cheered for one over the other. I of course now see that my feminism was laced with inner misogyny. I am still recovering from that perspective and working hard to embrace my femininity without sacrificing my toughness.

When news came that the next Winter Olympics would take place in two years (the IOC decided to stagger the winter and summer Olympics starting in 1994), and that Harding could be back on the Olympic ice in two years, I was ecstatic. I had faith that she would train like Rocky, land that triple axel in Lillehammer, and the gold would be handed to her then and there. A non-dainty woman would win gold based mostly on her ability to complete an outstanding athletic feat.

We have all been in a hurry to categorically sort Harding into a box — good or bad — but her legacy is as messy as our treatment of women.

Then came the news six weeks out from the 1994 Olympics in Lillehammer that Nancy Kerrigan had been attacked. Such a weird story and one that grew weirder and weirder as it unfolded. When Harding came under suspicion, I prayed to my heathen gods that she was innocent. Why would one want to do this when you could Zamboni the rink with her in a quick triple axel?

We seem ready to reconsider Harding. There is a space right now to discuss female complicity, if not guilt, and to discuss the ways that male power has affected women’s lives.

I have not seen the sympathetic I, Tonya, nor every documentary on Harding, but parts of her story, even after knowing she was at the least complicit in the attack on Kerrigan, still pull at my feminist heart. The facts of her involvement in the plot against Kerrigan are muddied because it largely came down to her word against her then-husband’s, Jeff Gillooly. As Sarah Marshall wrote in The Believer in 2014, Harding had suffered a history of abuse, starting with her mother, and including her treatment by Gillooly:

“Later, Tonya would claim that the plot had been motivated completely by Jeff’s greed, that she had been aware of it only after the fact, and that she had failed to come forward only because she feared Jeff would kill her if she tried.”

The abuse she suffered at the hands of those who were supposed to love and protect her… how does this affect our views of Harding, of her strength? Feminists have stood up and protected women who have killed because they were being abused; yet some have a hard time standing up for Harding. Maybe she truly does not deserve our empathy. I utterly respect journalist Christine Brennan, who has covered the saga for years, and wrote in USA Today, “Tonya’s lack of respect for the opportunities she was given is as breathtaking today as it was back then.”

But I keep coming back to the abuse.

I do not agree with what happened. What I am saying is that part of me feels that Harding fits into the classic survivor model. She did what she had to in order to survive her life. Harding was a young woman with an enormous gift that was not recognized because she did not fit the mold.

The U.S. Figure Skating Association may have stripped Harding of a title, but they cannot erase what she meant to me and other young women and girls who were hungry for someone different to root for at the time.

More Like This
My C-Section Almost Derailed My 5th-Degree Back Belt — Almost.
My Slowest Marathon Ever Is The One That Makes Me Most Proud
My 4-Year-Old Is Basically My Personal Trainer & It Works
My Child Athlete Self Still Has A Lot To Teach Me
What Parents Are Talking About — Delivered Straight To Your Inbox