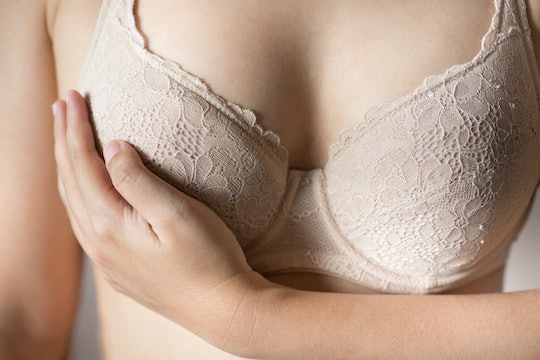 Some one in eight women in the United States will be diagnosed with breast cancer at some point in their lives, making it the most common cancer diagnosis in women, according to the National Cancer Institute. And early detection and treatment have been instrumental in lowering overall mortality rates in recent years. But a new study suggests that body issues will stop some women from doing breast self-exams — and keep them from getting proper medical attention early enough to lower their overall risk. What’s more, the less satisfied study participants were with the size and shape of their breasts, the less likely they were to perform this important act of self-care, researchers found.

Published this month in the journal Body Image, the study focused on 384 British women surveyed by researchers from Anglia Ruskin University and University College London. The majority of women struggle with body image issues, and the research participants were no different. According to the report, most participants said they were unhappy with the size of their breasts (31 percent wanting smaller breasts and 44 percent wanting larger breasts). The study's findings suggest that having a negative view of one's body made women less likely to perform routine cancer checks: one third of the women (33 percent) in the study admitted they “rarely or never” performed breast self-examinations, the researchers wrote.

What’s more, one in 10 participants admitted that if they did find a change in their breasts, they would either delay for as long as possible (8 percent) or not see their doctor at all (2 percent).

Viren Swami, Professor of Social Psychology at Anglia Ruskin University and lead author of the study, explained the possible connection in a statement on the university's website:

For women who are dissatisfied with their breast size, having to inspect their breasts may be experienced as a threat to their body image and so they may engage in avoidance behaviours. Breast size dissatisfaction may also activate negative self-conscious emotions, such as shame and embarrassment, that results in avoiding breast self-examination.

A 2016 survey of more than 10,000 women and girls in 13 different countries found that making unhealthy choices as a result of poor body image is alarmingly common. According to The Dove Global Beauty and Confidence Report, at least nine in 10 women surveyed reported putting their health at risk in some way because of body issues.

Swami added that society’s tendency to view breasts in sexual or aesthetic terms, rather than functional (such as their role in breastfeeding and nurturing infants), only added to women’s body image issues. “Promoting greater breast size satisfaction may be a means of empowering women to incorporate breast self-examinations and breast awareness into their health practice,” she wrote in the study.

The researchers told The Independent that these findings signaled a need to make practitioners aware of the emotional barriers that keep women from getting care, and the need to make early screenings more accessible.

On its website, the National Breast Cancer Foundation describes how to do a breast self-exam quickly in a couple of steps. Exams can be done while standing up in the shower or in front of a mirror, or while lying down flat on your back, according to the NBCF.

What’s most important is to get familiar with the look and feel of your breasts so that you can spot any lumps, knots, dimpling, or puckering, should they occur: move the pads of your fingers in a circular motion from the outside of your breast to the center, being sure to cover the entire breast and armpit area. Then, look for any visual changes as you raise your arms overhead or flex your chest muscles, according to the NBCF.

For more information on getting an early screening, locate free mammograms in any state, or learn how to perform a breast self-exam from a local health professional, visit the National Breast and Cervical Cancer Early Detection Program website. Run by the CDC, the program offers free or low-cost breast cancer screenings in every state.