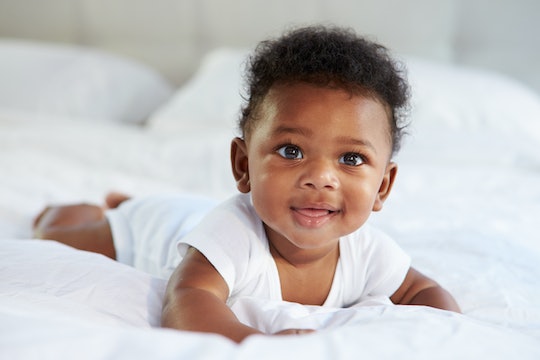 Finding the ~*perfect*~ name for your baby is no easy feat. While some parents may want something traditional but still unique, others may want their bundle of joy to completely stand out with their moniker. And if you need a little help deciding what to name your kiddo, don't fret: The list of the top baby names of 2019 so far has been released and it includes some pretty fun choices.

Compiled by baby-naming website, Nameberry, the top baby names from the first six months of 2019 was released this week and the list reveals parents are opting for, or at least considering, some unique names for their newborns, though there are some common themes. While the top 10 girls names are short, simple, and unique, the top names for boys are monikers found in books, movies, and other forms of pop culture.

It's important to note how these names are ranked; according to HuffPost, the list is formed through the amount of views each name receives on Nameberry, which serves as a predictive tool for the name's popularity by the end of the year, so it's not known yet how many parents went with these names.

With that said, it makes sense that Archie is the most popular name so far for boys. When Prince Harry and Meghan Markle announced that they had named their son Archie Harrison, people flocked to the website to find out the meaning of it.

But the other popular boys names also have unique qualities about them. The names Asher, Jasper, Silas, and Aarav all have biblical or religious origins, according to Nameberry. They pay tribute to a parent's faith and carry a deeper meaning while still sounding special and different.

Names like Milo, Theodore, Atticus (hello, To Kill A Mockingbird), Finn, and Jack (anyone a fan of the TV show, This Is Us?) all have origins in pop culture. Whether these names are found in movies, TV shows, books, or popular among celebrity kids, it's easy to see why parents like them.

The most popular girls names so far, however, are a little harder to pin down. While names like Olivia, Cora, Amelia, and Charlotte are familiar with being a mainstay on the baby name charts, some of these names are a little more unique.

For instance, the name Posie has only just gained popularity in recent years, according to Nameberry, as well as the names Amara (which means "grace" in Nigerian), Isla, Aurora, and Maeve.

While some of these findings may seem a tad surprising, there is actually a perfectly sound explanation as to why parents are picking more "unique names" for their kids. In one 2016 study, San Diego State University psychologist Jean Twenge found that babies are less likely to share their parents' names nowadays because they want their kids to feel like an individual, according to CBS News. "Through the recession and afterward, American parents continued the trend of choosing more unique names for their children," Twenge told LiveScience of the findings.

Twenge explained to TIME that this is because our society has become "increasingly individualistic," telling everyone to focus on themselves, rather than to focus on the rules. "The tendency to want your kids to stand out is even more pronounced now than it was 10 years ago," Twenge told the news outlet. "They were raised with phrases like, 'you shouldn't care what anyone thinks of you, you can be anything you want to be, it's good to be different, you have to love yourself first before anyone else'."

And considering these top baby names for 2019 so far, it sounds like unique baby names are here to stay.