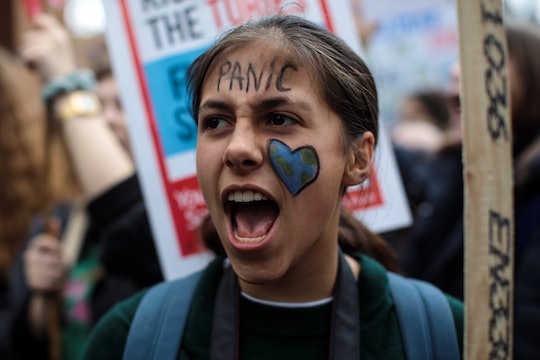 As students around the globe explore new forms of advocacy and activism, it's becoming clear that Generation Z has no plans to sit quietly while the issues most pressing to them get left unaddressed by lawmakers. But just what issues top Generation Z's list? In honor of International Day of the Girl, Bustle Digital Group partnered with She's the First and Pollfish to survey thousands of girls from Generation Z about the issues most important to them. And as it turns out, the top issues girls are concerned about are personal and political.

In a Pollfish survey of 2,000 girls age 14 to 22 (Generation Z begins with individuals born in 1997, according to Pew Research Center), Bustle found respondents were most concerned about education, preserving the planet, and sexual and domestic violence, in that order.

Overall, 31% of survey respondents said education was one of three issues most important to them at this point in their lives. A total of 30% of respondents cited preserving the planet as one of their top three issues, while 26% selected sexual and domestic violence.

Given the recent student-organized climate strikes happening around the globe, it's not surprising to find that preserving the planet tops the list of concerns for girls from Generation Z. What is surprising, however, is how much anxiety the issue is giving them.

When asked if they were anxious about the current state of our planet, 65% of respondents said they were very or extremely anxious. Another 32% reported being just somewhat to not very anxious while just 3% said they were not anxious at all.

In a separate question, 87% of those surveyed by Bustle said they had concerns about being affected by a natural disaster caused by climate change. What's more, 64% reported feeling very or extremely concerned that their hometown would be harder to live in 50 years from now as a result of climate change. And perhaps most troubling of all, a majority of the survey's respondents reported being least optimistic about the issue of preserving the planet being resolved sometime in their lifetime.

To celebrate International Day of the Girl, which the United Nations has annually declared to fall on Oct. 11, both Bustle and She's the First have rolled out Bill of Rights initiatives specifically for girls and young women. While She's the First, a non-profit focused on combating gender inequality through education, unveiled a Global Girls Bill of Rights, Bustle focused on crafting a U.S. Girls Bill Of Rights. Both bills seek to speak to the rights at the forefront of Generation Z girls' minds, including those they're most fearful of loosing, and those they don't feel they have to begin with. You can check out Bustle's U.S. Girls Bill Of Rights here.