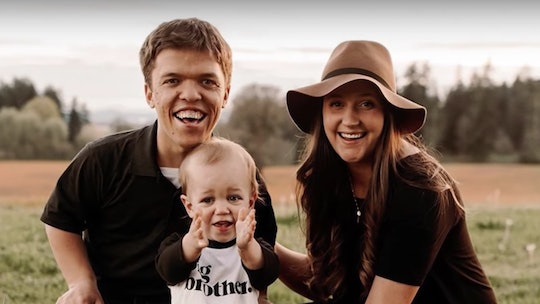 It's crazy isn't it — how different each pregnancy can be? Whether it's comparing the journeys of two women, or noticing differences from pregnancy to pregnancy for the same woman, no two journeys are quite the same. You might have all-day nausea and vomiting while pregnant with your first baby and then feel completely normal with your second. It's not necessarily fair or pleasant. It's just what happens sometimes. And Tori Roloff dishing on her second pregnancy proves that each experience can be wildly different.

In case you missed the exciting news, Zach and Tori Roloff of TLC's Little People, Big World recently revealed they're expecting baby number two, People reported. Tori took Instagram on Monday to share the big reveal. "Zachary and I are so excited to announce that Jackson is going to be a big brother!" she captioned a series of photos of herself, Zach, as well as their 2-year-old wearing a "big brother" shirt. "We are expecting a sweet baby girl this November! 🎀 Thank you so much for always supporting our family and loving us!"

Just one day after the announcement, Tori invited her followers to ask her anything about the pregnancy with her second child. And her answers were both candid and revealing.

One Instagram user asked what the odds are that her and Zach's second child will be a little person — to which she responded, "50/50." According to the National Human Genome Research Institute, for any given pregnancy Tori and Zach have a 50/50 chance of having a child with dwarfism. Their first child, Jackson, is a little person — and their baby girl has the same odds of being one, too.

Another Instagram user asked the mom-to-be how she is feeling. "Weeks 6-9 were rough. But starting to feel better," Tori admitted. "Waiting for that second trimester energy boost. Still hasn't hit me." (Poor mama; I remember how horrible I still felt at the beginning of the second trimester.)

Yet another person wondered if Tori's second pregnancy has been easier or harder than her pregnancy with Jackson. To that, she replied, "A lot harder. But still easy. If that makes sense. I had no symptoms with j other than egg aversions. I've got all the symptoms this time." In another Instagram Story post, Tori shared that she's suffering from all-day sickness — which is basically the worst.

Other questions from followers had to do with the baby's sex. One person asked if she's excited to be having a girl this time. "I screamed. And cried. I'll share the video some time," Tori promised, later noting that she can't wait to get started on a girl nursery. And the thing she's looking forward to the most about having a daughter? "ALL the dresses and bows and florals. Bring it," the expecting mom declared.

Tori also revealed that she and Zach tried for eight months to get pregnant before succeeding. "Which was hard and makes me have such an appreciation for women in general," she wrote. "Conceiving isn't as easy as it's made out to be."

A final question asked Tori if it's been difficult for her to keep up with Jackson, considering she hasn't felt the greatest. "Yes. Thank goodness for amazing husbands," she responded. (Amen to that!)

So far, it seems as if Tori Roloff's second pregnancy couldn't be more different than her first. Between feeling sick all day long and having to wrangle her 2-year-old son, and I'm sure the expecting mom is beyond exhausted. The silver lining? At least seems like Zach has been stepping in to give his wife an opportunity to rest. Hang in there, mama. (And congrats, again!)